When the owner of this Ford pickup truck headed out into the night, all that he ...

When the owner of this Ford pickup truck headed out into the night, all that he wanted was to grab a simple burger from the Jack-in-the-Box drive thru, however, the simple situation would erupt to make matters just a little bit more complicated for the poor motorist.

Instead of just getting his burger and fries and being on his way, this truck would go up in a ball of flames in the drive thru and nearly set the building on fire if not for this police officer who was able to rush to the scene and be of assistance to the high heat scenario.

We watch from the point of view of the trooper as he rushes to the scene and uses his push bar to get the truck out of the way as to not ignite the entire building before the firefighters are able to show up to completely extinguish the blaze altogether.

Feast your eyes on the situation below that most certainly unfolds in a hurry but thanks to some quick thinking, it doesn’t have to be worse than it already has evolved to. Hopefully, this this truck owner was able to get all of his problems sorted out and get his transportation back on track. 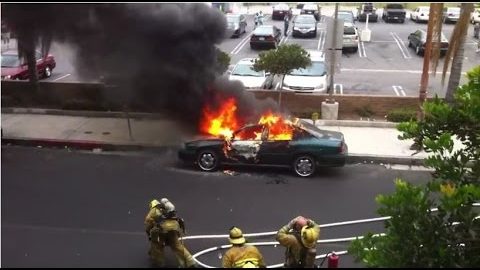