Fox Body Sends it, Slides Sideways Into a Ditch 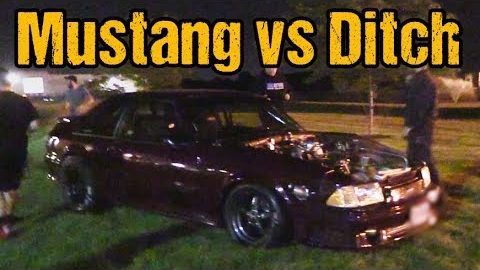 While you’re out there drag racing, you never really know what’s going to happen. One moment things might be going as according to plan and the next, well, your plan becomes unhinged, sending you for quite a wild ride as you can do nothing but hang on and hope for the best. It’s something that you never wish on any racer but sometimes, losing control is simply unavoidable as putting down that much power to any surface is something that’s incredibly difficult to do right and, when all the factors don’t line up in a row, can definitely be an easy situation to lose control of, leaving fate in the hands of inertia.

This time, we catch up with just that situation as things get a little bit scary when a couple of cars line up at on an unprepared surface. One of the challenges of racing on anything other than a prepared drag strip is that traction is almost nonexistent. Without the proper glue and rubber in place, we see a lot more cars sliding around out there. That just so happens to include this rowdy Ford Mustang  that suffered some sort of mishap. In the scheme of things, the situation escalated from a normal race to a crazy undertaking in a hurry.

If you follow along down in the video below, you’ll find quite the hellacious video as the Fox Body ends up getting sideways and crashing straight into a dirtch. Luckily, things went as well as could’ve been expected. No injuries were sustained and the ditch served as a means of slowing the car gradually. If a wall were there, things would’ve been much worse.

One can’t help but be frustrated that something like this happened in the first pace. However, it’s hard not to be grateful that you made it out in one piece.