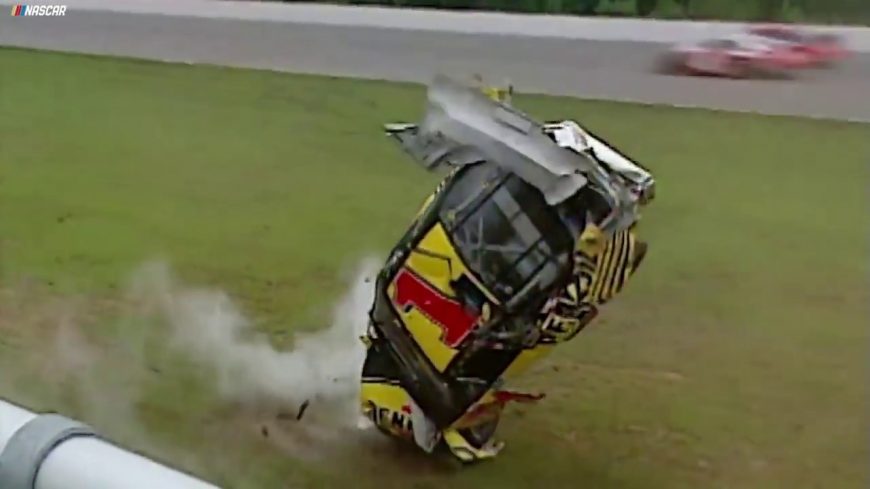 Pocono Raceway in Pennsylvania has been the sight of some great racing and some terrifying crashes over its four decades of operation. “The Tricky Triangle”, so named for it’s distinctive triangle layout, was the sight of this devastating crash involving then-teammates Dale Earnhardt Jr and Steve Park.

As the tightly bunched pack sped down the track’s famed 3,700 foot-long back stretch, Park attempted to move to the outside of Rusty Wallace. However, Wallace also moved toward the outside, be it to block Park or just as part of his own plan to move up through traffic, and the cars made contact. Park’s Pennzoil Chevy was sent hard toward the inside, where teammate Dale Jr was running in his Budweiser Chevy.

With nowhere to go and no time to get there, Park basically became the blade on the nose of a Dale Jr snowplow as Earnhardt’s Monte Carlo stuck squarely into Steve’s door. The two cars went for a bumpy ride across the infield grass, sliding for seemingly forever but not really scrubbing off much speed, which was a bad, bad thing.

Waiting on the other side of the infield grass was a single armco style guardrail and Earnhardt literally rammed Park’s car into the barrier, shredding the Pennzoil car and sending it flipping while Dale slid past, coming to rest with much less damage to his car. Junior saw the terrible shape of Park’s car and immediately climbed from his Chevy to run over and check on his teammate, eventually helping him out of the car and walking away together with his arm around Steve.

Park was a bit shaken up and likely had some bruises that lingered for weeks, but escaped serious injury. He was quick to let his mom and dad back him know that he was just fine when he was interviewed after the incident.