Getting This Close to a U.S. NAVY SHIP Might Not Be A Good idea! 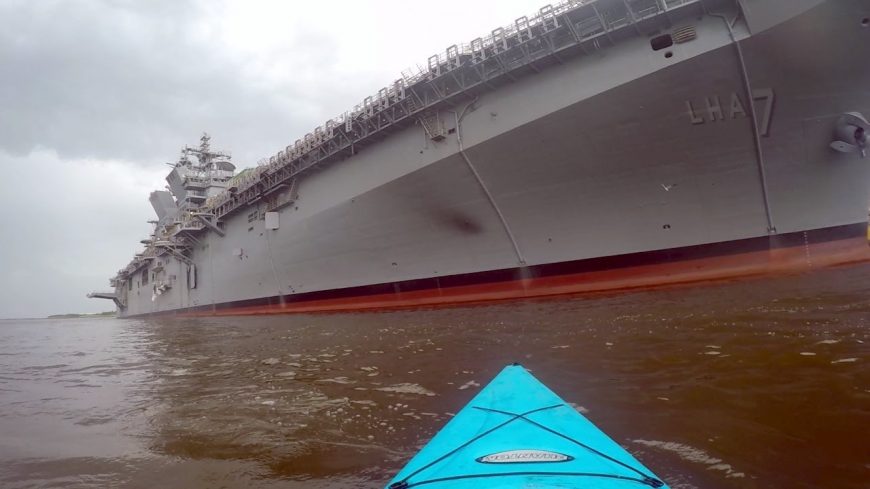 There’s nothing like dropping your kayak in the water and paddling around in the shallow waters to explore and check out the landmarks. You can float around and have a leisurely cruise or you can paddle hard and cover some ground… errr water.

Dave from the Riding With Dave channel is known more for riding motorcycles and sharing footage of those adventures, but on this day, decided to grab his kayak and his buddy Jake and paddle out to get a close up look at some Navy ships in Ingalls Shipyard in Pascagoula, Mississippi. During their trip out to the actual shipyard, Jake gives Dave a little background info, including the fact that these ships take about 7 years to build and the ships sent by President Trump to bombard the Syrian Embassy were all built in that very shipyard, where Jake used to work.

After paddling by the massive vessels, Dave and Jake decide to head over to an area formerly used for shipbuilding, but is now basically abandoned. Dave, being a big of a risk taker, takes Jake’s challenge to exit the water and do a little land exploration, despite having seen a security truck on the premises and knowing it was not allowed. He doesn’t venture far, though, and return to his kayak for the long haul back to where they put in. On the way, they begin to tire and you can hear in their voices that they’re sucking wind. The video ends with the pair floating together in the shipyard just yards from the massive Navy vessels, something I can’t say I wouldn’t love to try myself.

Dave has some pretty cool content on his channel, so we’re gonna keep and eye on his stuff and bring you guys anything we think you might enjoy, so keep an eye out for some motorcycle videos in the near future.