Girl Ejected in Crash After Attempting to Escape Vehicle

Girl Ejected in Crash After Attempting to Escape Vehicle

This video is long, but take our word for it, it’s CRAZY!

Within the first few moments, we see a woman open the door in the car in the next lane. She appears to be trying to exit the car, and according to the connotations, which the uploader did an excellent job with, the driver wouldn’t let her get out. When the light turns green, he speeds away with the door still open and her legs still hanging out of the door. A few seconds later, the car actually slides through a curve and into a guardrail, then across the road and into a bridge pillar, ejecting both occupants.During the impact, the car was knocked into reverse. After being flung from the car, the driver jumps up to stop the car from rolling backwards, then picks up his seemingly dazed girlfriend and drags her limp body to the car before jumping back into the driver’s seat and driving away.

The driver of the pursuing car with the dashcam then calls 911 and he continues to follow the car through the area, keeping close tabs on them, but is never able to end the pursuit without putting himself and others at risk, so he plays it smart and trails the car, hoping police will eventually intervene. The crazed driver of the black car runs several traffic lights and stop signs, obviously not worried about the safety of himself, his girlfriend or others around him on the road. The hood of the car, damaged in the impact with the bridge pillar, flies up several times during the pursuit, forcing the driver to stop randomly and close it.

Eventually the girlfriend fights her way out of the car and the driver leaves her alone on the side of an interstate, but by this time other drivers beside the camera car had taken notice of the situation and one of them stayed with the girl while the original pursuer continued to chase down the driver. This is one of the craziest videos we’ve ever watched and can’t believe what all went down! Go ahead and watch for yourself! 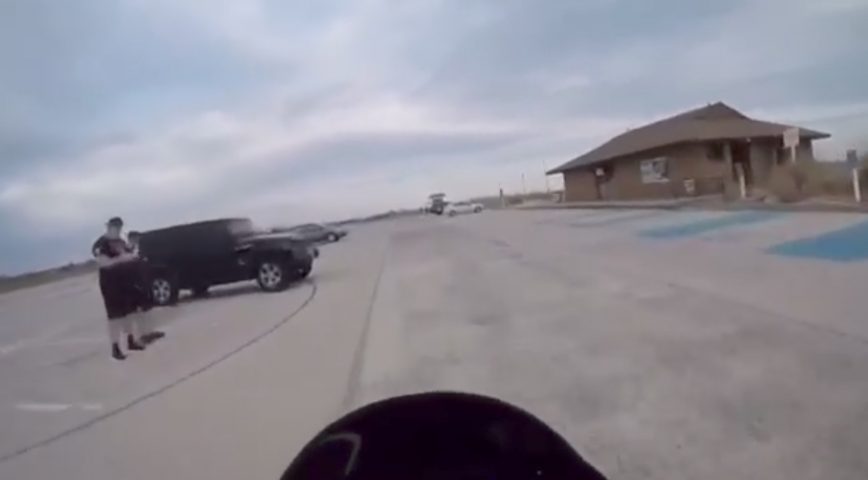