Girl runs in front of a drift car after getting scared, almost gets hit 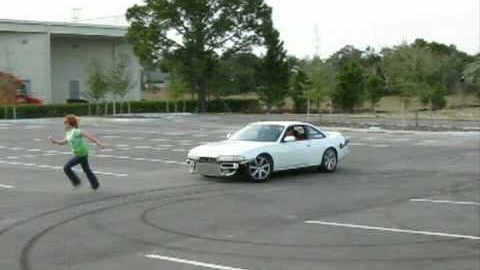 We have seen some people do some pretty wild and dangerous things behind the wheel of a car and this time, well, it almost got ugly.

When these folks decided to head out and try one of those “do not try this at home” stunts, they quickly learned why exactly that warning label exists on videos like this.

In an attempt to do a little drifting sideshow, this guy would head out to try and drift around his girlfriend who would need to stand still for the volatile display to have a chance at working.

We think that you could see where this one is going. We watch as the drift begins and the poor girl just couldn’t muster up the courage to stand in place.

We watch as the girl sprints away when the drift show begins and nearly becomes roadkill as she runs directly in front of the moving car.

Who knows? Maybe some would argue that he was trying to run her over on purpose with that voice of hers.