Girl With ZERO Throttle Control Blows Up a Wheelie Simulator

Girl With ZERO Throttle Control Blows Up a Wheelie Simulator

As it is one of the most basic stunts that you can do on two wheels, you’ll see ...

As it is one of the most basic stunts that you can do on two wheels, you’ll see lots of people pulling wheelies. However, even though it might be one of your first steps in the direction of pulling off more complicated maneuvers, it might not be the easiest for everyone to be able to learn how to keep their bike stable. Therefore, if you want to learn how to do such a thing before trashing your motorcycle and having to pay to get it fixed and potentially injuring yourself, you can hop on a machine like this to show you how it’s done.

In this one, however, we check out a situation that has a girl on a wheelie simulator, attempting to teach her the ropes, when all of a sudden, it turns out that she throws a little bit too much throttle into the mix, revving the bike to the moon and going a little bit too far. Before long, we watch the crash and burn unfold as she leans back on the simulator while pegging the throttle, blowing the bike up and sending flames shooting everywhere as the engine bangs off of the limiter, really making stomachs everywhere around the situation a little bit nervous.

Check out the video below that will take you to the scene of the destruction. This is one of those times that will have you hoping everybody is alright but on that same note, you really can’t help but keep your eyes peeled and peeking at the destruction as it happens so quickly. After seeing what this one is all about, be sure to tell us what you think of how all of this was handled. I’m certainly no pro here but you’d be inclined to think that someone would’ve hopped into action and yanked her off of the bike!

Wheelie Simulator Helps Riders Learn How To Wheelie Without Consequence 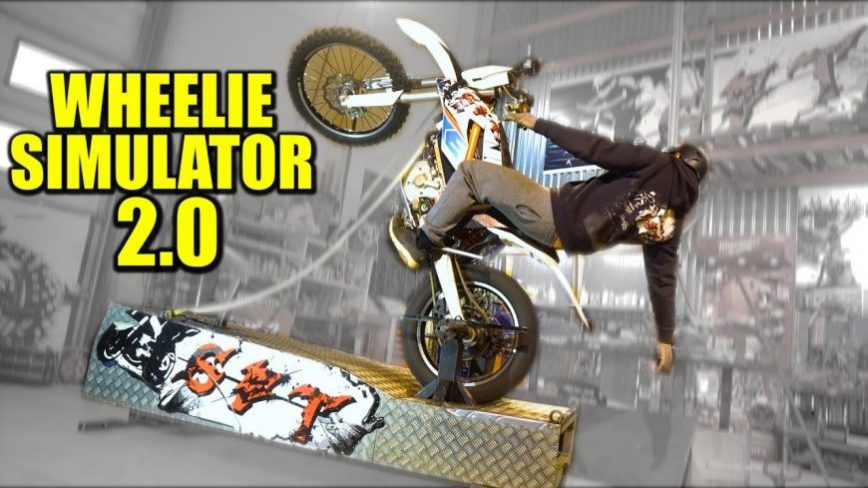