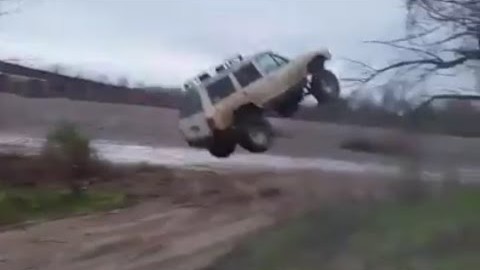 When the guy behind the wheel of this Jeep Cherokee went out for a spirited climb, he decided that he would try to ramp his clunky machine off of a hill.

While he probably did expect to get some air, we’re going to guess that how high he actually got was a little bit closer to the stratosphere than he had originally thought.

When we hear the sound it makes when the Jeep comes down, we’re going to take another stab at guessing what’s going through his head by saying that he’s probably full of regret at this point!

Check out the video below that shows off the giant jump and hard landing. This might not be the way that you want to approach a jump. Baby steps… baby steps.