One of the fun things about building a go-kart is the sheer simplicity of it all. ...

One of the fun things about building a go-kart is the sheer simplicity of it all. Unlike a car, everything is exposed and accessible. Changes are just a couple of turns of the wrench away. With that, we have seen some pretty crazy combinations come to life. Builds have evolved to include everything from motorcycle powered go-karts all the way up to something that might even have LS power strapped to it.

This time, though, thanks to the Warped Perception YouTube channel, we’re able to check out something that we can’t say we’ve ever seen before. In the world of unconventional go-karts, the builds can go all sorts of different directions. This time, the direction that the creator was thinking was turbo diesel.

Yup, you read that right!

We would have to say that, even in the scheme of unconventional builds, this one has to rank toward the top. With a little bit of creativity and ingenuity, though, the build came together rather nicely, giving us something that’s really interesting for the eyes and ears alike. Let’s just say that anywhere that this bad boy goes, it’s going to be sure to turn at least a couple of heads.

By following along with the video below, we get to witness the entire process of creation from start to finish. Following that we even get to see it rip around a bit! Naturally, with a custom fabricated setup like this, there are going to be some trials and tribulations along the way. However, from what we have seen from this channel, the creator behind it all is more than equipped to be able to handle the speed bumps.

If you could have your way and put any power source behind a go-kart-like this, what would it be? The possibilities are truly endless. 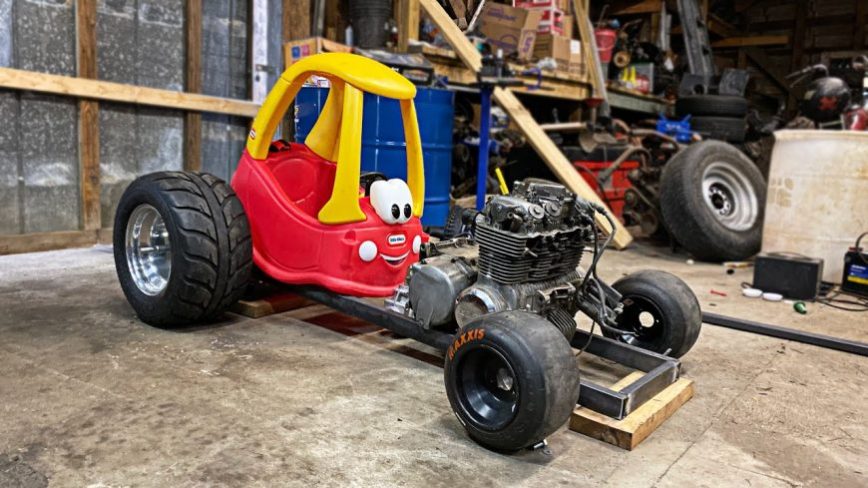