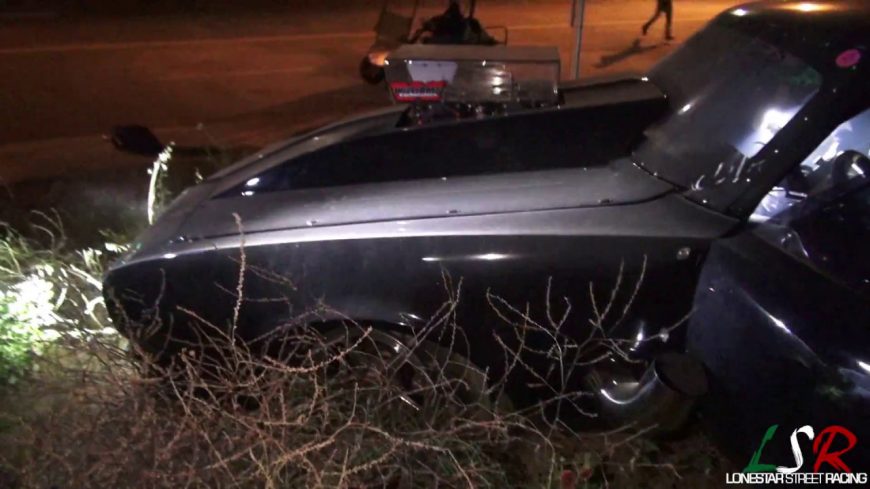 Even for the most experienced street or track drag racers, they can’t always predict exactly how the car is going to react to the surface at hand. Even if you’ve done it a million times, that million and first time could be the instance where all hell breaks loose. You truly never know when your setup is going to go awry and not agree with the racing surface beneath it, wreaking all kinds of havoc on your race.

This time, we check out some action as the Godfather Chevrolet Camaro goes head-to-head with the Sinister Split Bumper driven by Monza and while the Godfather did look like he was going to go home with victory based off of that early jump, a plot twist in the action would make sure that he wouldn’t be the one to cross the finish line first. In fact, it would turn out that he wouldn’t be crossing the finish line at all.

We watch as the first generation Camaro jumps out to an early start but shortly after loses control and swerves a little bit before the driver is unable to regain control of the car and launches into the grass. That one certainly did a little bit of damage but at least the cars didn’t collide and injuries were nonexistent. In the long run, this one could have gotten a lot worse if certain factors fell into the wrong place.

Check out the video below as the cars rocket down the street and the Godfather nearly takes out a cameraman! You have to give that camera guy credit because he did stand there long enough to get just the right shot to bring you the action that all went down at Cash Days.  It really is an unfortunate turn of events but sometimes, you have to just accept the fact that you took this risk when you stepped up to the plate in the first place. I’m sure that it won’t be long before the Godfather is back out there and racing once again.