Going Legit: The ’55 Gets Legal With Steel Roof And Quarters 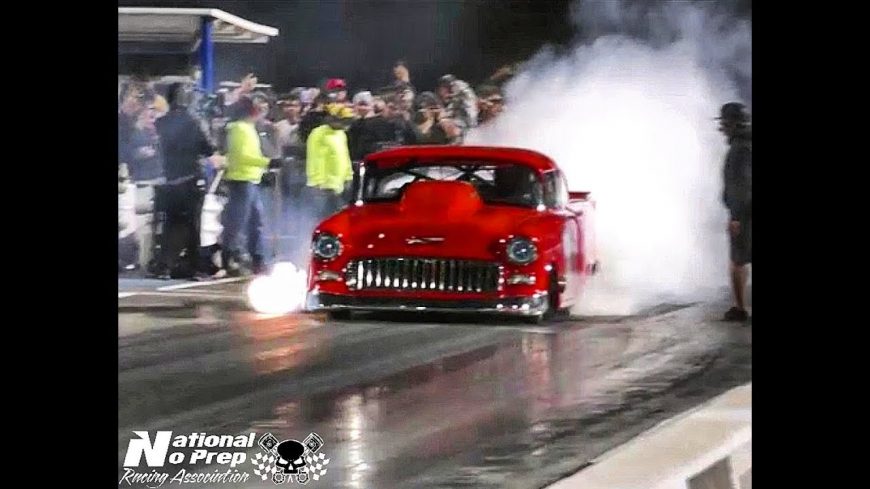 If you follow the world of no prep at all, you’ve almost certainly seen Chuck Parker’s gorgeous red 1955 Chevrolet mixing it up with the best of the best, with Parker taking home the money many times over the past couple of years. What you may not know is that there has been a rules change in the world of no prep that has the car on the outside looking in at many events because of its composite body.

Parker and crew chief Kirk Peters are not ones to just walk away from a good thing because of a simple rules change though, so the team has made the decision to swap the fiberglass shell for factory-reproduction steel, putting the car back in legal standing with all of the the no prep races and series. The car will still be powered by the brutally powerful nitrous-injected Hemi that propelled Parker to some scintillating runs over the past few month after they upgraded to the Sonny Leonard-built bullet.

In a bit of an ironic twist, the car, which was already a force to be reckoned with at any given event, will actually end up being lighter after swapping to the steel body panels. If you’ve ever looked at other ’55 Chevy drag cars, they’re typically chopped and channeled and often pinched in the nose for better aerodynamics, and they’re made out of the thinnest ‘glass possible to reduce weight. The body on the Parker’s ride was a street rod body, constructed to almost the exact same dimensions as the factory ride and made out of thick, heavy fiberglass to give it a great deal of strength and to make sure the paint and body guy had plenty of material to work with to get the body smooth and straight. By swapping the factory-style panels, the car will tip the scales at a number lower than previously, though Chuck and his crew have elected to keep the exact weight loss number a secret.

You wanted factory panels, no prep. You got ’em, and in the process you lightened one of the baddest hotrods on the circuit. Let’s see how that works out for anybody in the other lane beside the ’55!