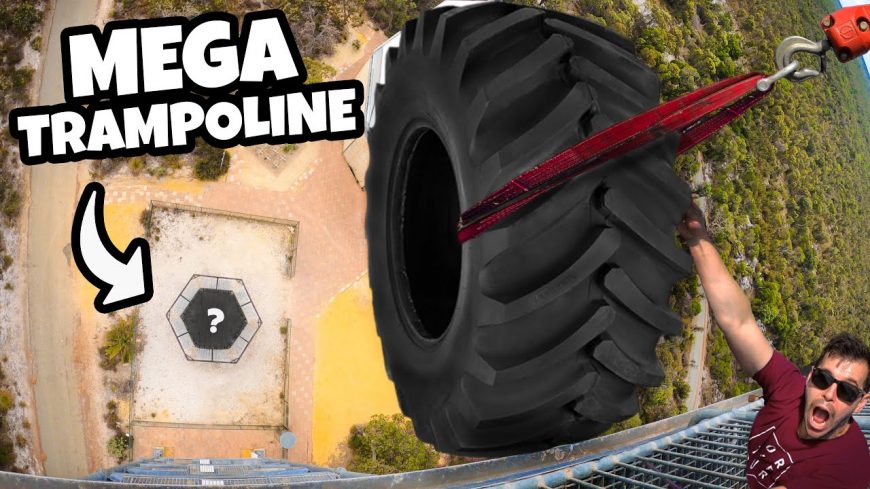 It’s pretty crazy, the insane effort that is sometimes invested in the name of being entertaining. YouTube has given rise to a whole plethora of videos that fall into exactly this category. Unless there’s some functional use of the world’s strongest trampoline that we’re missing, that’s precisely what this video does as well.

This isn’t the first time that we’ve seen this thing in action.

In fact, we have seen both a boat and a minivan dropped from over 100 feet in the air to bounce off of the world’s strongest trampoline.

This time, the guys at How Ridiculous are having a little bit more fun with their creation. We can’t necessarily blame them, either. If we had something like this in our possession, we would never stop with this sort of action and playtime wrapped into one.

The subjects of discussion this time are none other than a large tractor tire and a golf cart. That’s right, these two massive objects are going to be dropped from just about 150ft in the air. They will be left at the liberty of gravity and the elastic force of the trampoline to determine their fate.

Let’s just say that we’re not really expecting the golf cart to be able to make it through this one. On the other hand, the tire will probably have a better chance. However, we’re kind of interested to see where exactly it will bounce to.

When we follow along with the video below, we get to join in with what is basically a bunch of grown kids at play. This, ladies and gentlemen, is the result of what happens when you can make YouTube a “Real job.”

If nothing else, this one might just serve to act as inspiration for other people to try and take up YouTubing for a living. What job could be better than this?