We, as Americans, happen to be incredibly obsessed with Hollywood and the movies they ...

We, as Americans, happen to be incredibly obsessed with Hollywood and the movies they produce. As our culture has it, the biggest stars gather a following that is second to none as fans are interested in just about every aspect of their lives. We all have probably fallen victim to this kind of thinking at one point or another. Over here in the car guy world, we don’t just find joy in following the people who star in movies but also the cars that help to make some of the best movies what they are. With flicks like Gone in 60 Seconds, one of the most iconic movie cars ever, has risen in Eleanor, the 1967 Ford Mustang Fastback.

Since then, the following for the ’67 has grown beyond what it already was as the car has been quite the popular item throughout the car community already and, in addition, many spinoffs have come about as people have done whatever they could to replicate Eleanor in all sorts of different ways.

In this BigKleib34 video, we get the chance to take a look at a car that might just be the fastest Eleanor to ever touch tire to pavement in an Outlaw 10.5 machine that really blew us away at Cecil County Dragway’s Street Car Shootout as it blasted down the track to some blistering passes.

Check out the video down below that showcases the car taking shots at an eighth mile of drag strip and finding its way into the 4-second range, an impressive showing to say the least. One thing is for sure: Gone in 60 Seconds would have been a heck of a lot cooler if Eleanor looked more like this machine! Could you imagine the movie being remade with an Outlaw car like this one!? Nicholas Cage wouldn’t know what to do with himself!

I Never Saw THAT Coming!! The ULTIMATE SLEEPER MACHINE! 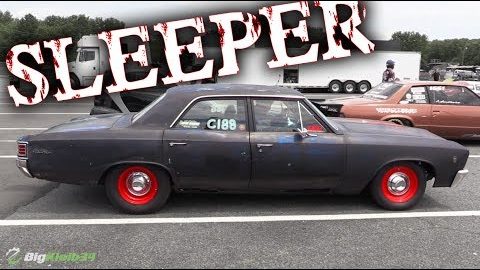