The Gonorail Is Now At The FNA Firehouse. A Word From Farmtruck! 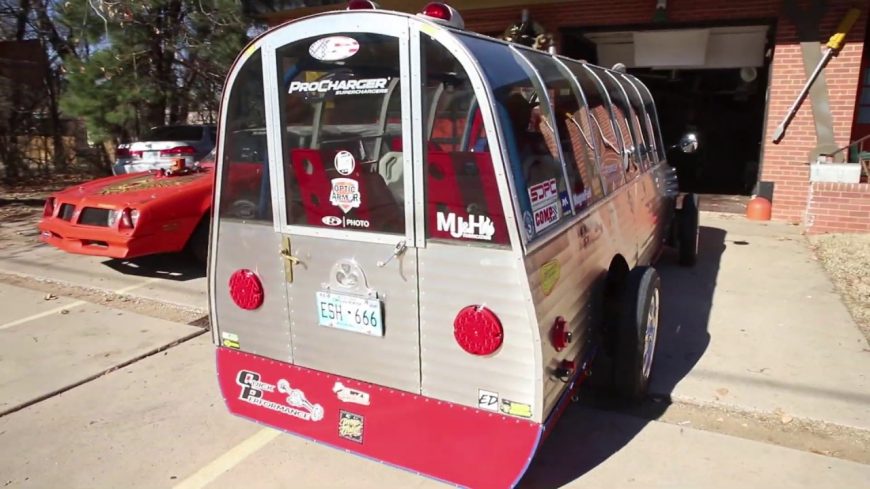 The main storyline of the second season of Mega Race was obviously the race itself between Ryan Martin and his Fireball Camaro and Alex Laughlin in the Gas Monkey Challenger. However, many fans tuned in for the “secondary story” of the race between Farmtruck and Azn and their insane GONORAIL monorail build vs the admittedly slick Mustang built by the guys from Misfit Garage.

In case you’ve forgotten, Farmtruck, AZN and their team of guys built a monorail on wheels, a truly one-of-a-kind project, to go head to head for ten laps around a road course against the Misfits’ Mustang, a platform that was, at least on paper, decidedly more logical than a huge, top-heavy monorail car.

However, we don’t race on paper, and after the GONORAIL was fitted with a stout powerplant, a stiff suspension that helped minimize roll from the hefty cabin, and some nice wide tires, it became immediately clear this wasn’t going to be a walk in the park for the smaller, lighter and more agile Mustang. After jumping out to a pretty sizable lead that grew quite a bit when the Mustang’s driver spun the car out in the trackside gravel, Farmtruck wheeled the GONORAIL to a convincing win and honestly made it look almost effortless.

Now, if you’re in or going to be near the OKC area, you can swing by the FNA Firehouse and check out the GONORAIL for yourself. After having some teaks and updates done, the unique ride has found a home at The Firehouse, at least for the time being, and you can go by and check it out for yourself.

It’s not clear at the moment if there will be a Mega Race 3, but if so, you can bet Team FNA will come up with something to take on anything the other team throws at them. So far, they’re 2 for 2 in Mega Race challenges, and I don’t expect them to give up that streak without a fight.

« The Story NBC Would Like to Forget: the Repressed Embarrassment of NASCAR vs Dateline