405 Top 10 powerhouse Jerry “Monza” Johnston has quietly become one of the fan favorites on the show. While in the early going, he was more reserved and let his car do the talking for him in most cases, as the show has progressed, he’s become more of a cut up and jumps into the smack talk from time to time. He’s still keeps a pretty positive attitude though, still letting his gorgeous 2nd Gen Camaro known as the Sinister Split Bumper back up any smack talk. With several decades behind the wheel of high-powered cars, Jerry has as much experience as anybody at Bristol, and it would come in very, very handy!

Lined up with the wicked red Mustang known as Lucifer, Monza knows he has his work cut out for him lined up against another big-inch nitrous car with big tires out back. By all measures, this should be a good race, and it proves to be just that, right up until it isn’t. You can see Monza appear to be just nosing ahead of Lucifer when the huge nitrous flames go dark for just a split second. To the trained eye, it is immediately obvious that he has to pedal the throttle, and that means the car is losing traction.

Jerry jumps back in the gas but the damage is done and the nearly picture perfect A-to-B run that Lucifer is making leaves no room for error. As he fights to regain the lead, Monza loses traction again and begins to fish tail, but those years of experience kick in and he gathers the car back up, keeping it off the wall and in his lane. However, all of that slipping and sliding meant Lucifer was racing away for the win and would go on to the next round while Monza would have to load up after this one. 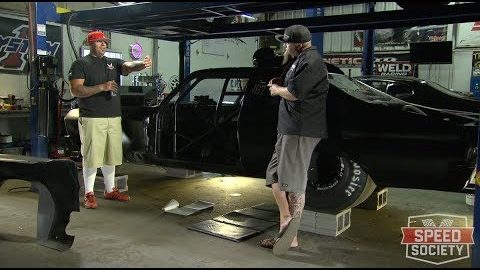