Guy Buys SKOAL Bandit Funny Car at Barret-Jackson, And It Catches on Fire! 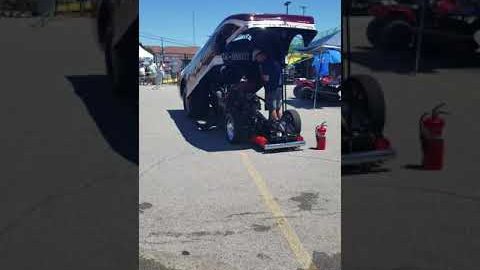 Last weekend, the Goodguys held their 2018 Nitro Thunderfest Night of Fire, but I think they had a little something different in mind when they chose that title for the event.

This nostalgia funny car, one that hearkens back to Don Prudhomme’s days behind the wheel of the Skoal Bandit floppers, had just been purchased by its new owner and brought out for the first time to the event. While I don’t know any details about the car, I have to assume it’s powered by the typical funny car powertrain consisting of a raucous supercharged HEMI running a high percentage of nitromethane and methanol. As you might imagine, this means that even at idle, there’s a lot of stress going on inside the engine and sometimes things just break. That seems to be exactly what happened here when, after a crew member revs the engine a couple of times, it kicks a rod out of the side of the block and ignites a terrifying fireball.

Flames erupt around the crew member as he reels back and stumbles away from the car, trying to escape the sudden burst of fire. While it looks terrifying and certainly could have been dangerous, it looks as though the crewman is able to jump out of the fire before he was seriously injured.

I cannot say for sure what could have happened to cause the engine failure. It could be anything from a fault in the tune to and error in the assembly process and any number of factors in between, including a flaw in the parts themselves. Regardless, we are just glad to see the crewman and driver were uninjured in the incident. Hopefully they’re able to get the engine repaired and rejoin the Nostalgia circuit soon.

This definitely could have gone much worse for this team.

« Off Shore Oil Rig Gets Pounded By Crazy Waves