Guy Does Burnout In Chrysler 300C In Front Of Crosswalk… Gets Busted Instantly! 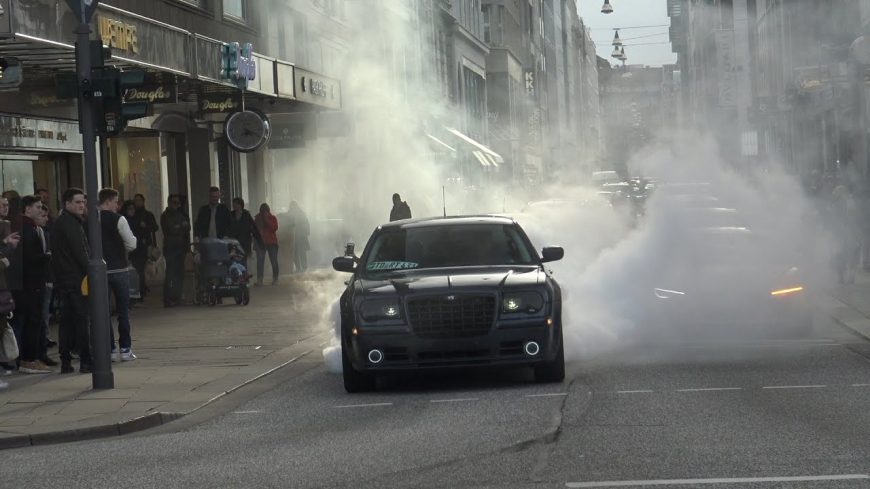 Okay, just to get this out of the way before we get the going about this Chrysler, we have to admit that we absolutely love burnouts! There’s just something about a car using all of its power to turn those rear tires and transform them into a smoke that’s just so appealing, especially when you have a beefed-up machine that’s ready to do it in a hurry. However, we do realize that there is definitely a right place and right time for something like this. It looks like this guy might’ve gotten caught up in the wrong place at the wrong time when he decided to shred some rubber.

You see, if you decide to do a burnout in of the middle of a crowded city street, you’re pretty much putting yourself in jeopardy. It’s no secret that, with all those eyes, there’s a good chance that there might be a police officer somewhere the vicinity but this Chrysler 300c owner decided to get busy anyway, really ripping off a massive burnout. This wasn’t a tiny little smoke show but rather an insane cloud making session that would make everybody within a couple blocks stop what they were doing and redirect their attention to see exactly what was going on.

Unfortunately for the driver, the insane show also drew the attention of some nearby police officers who didn’t think it was as cool as we did. It was only a couple of short seconds after killing these tires that he would pull around the corner and the officers would be waiting for him, ready to write him a couple of tickets, or so we would assume.  Sometimes, if you want to do something like this that’s illegal, you have to be willing and ready to pay the price afterward should your actions go awry. I guess, all factors considered, if something went wrong here there would be lots of carnage in the form of people getting injured.