Guy Pranks His Friend by Wiring his Horn to his Brakes 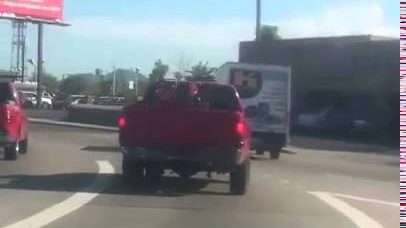 We all have that one friend who just thinks that pranking people is incredibly hilarious and might even take it to a whole new level, partaking in pranks that have so much effort in them that you would have never seen coming. This time, we catch up with a situation that shows us just that friend as he takes the opportunity to use a little bit of trick wiring to make his buddy’s horn sound when he punches the brake pedal in his Dodge Ram. As you can imagine, when driving through traffic, this could cause quite a stir and commotion. I’m just imagining all of those other drivers who would be sitting there and wondering why this guy is laying into his horn being so inpatient. Meanwhile, little did they know, it’s nothing more than a prank!

All that’s left to do after wiring it up is to sit there and watch and that’s exactly where we join in on the situation as the prankster here takes the liberty of pulling out his camera to film the whole thing going down. The man with the camera can barely contain his laughter and we’re right there with him as his poor buddy has no idea what’s going on. You have to admit that, regardless of the risk of the guy behind the wheel of the truck getting punched in the face thanks to somebody else thinking that he had road rage, that the setup on this one was pretty ingenious.

Follow along in the video below that will show you the moment that this prank ended up being oh so worth it. Is this perhaps the best automotive prank that we have seen to date? If it isn’t first on the list, I would venture to think that it probably ranks up there pretty high. There’s nothing like some good clean fun to get you laughing like this.

« Is This The Largest Automotive Collection in the World? 1,800 Cars in Rural California