Guy Shows Up To An Offroad Event In a Giant Tank Like a Boss!

Guy Shows Up To An Offroad Event In a Giant Tank Like a Boss!

If you want to make waves at an offroad event, or honestly ANY event, one surefire ...

If you want to make waves at an offroad event, or honestly ANY event, one surefire way to get attention is to show up in a tank. It doesn’t matter if your tank is really only half of a tank, as long as it’s the fun halt, the half that you can drive around and make a lot of noise with. That’s exactly what this guy has done, having outfitted the bottom end of this tank with a couple of couches for his passengers to ride in comfort and an umbrella for those days when the sun is beaming down.

It looks like he’s just tooling around, keeping the kids entertained with rides on the tank, and generally enjoying being the only guy on the property who can say “I have a tank, wanna ride?”

While it doesn’t go all that fast and it really isn’t much to to look at, since it’s just the engine and drivetrain and not the top half where the massive gun would be mounted, but I mean, come on, it’s a tank! Hasn’t there been a time we all wish we could just roll up on something so outlandish and unique that everybody just stopped and stared when we drove by. There are a handful of exotic cars that cause that type of reaction, and tanks. And honestly, at this point, it’s probably easier to get your hands on a tank, unless you have piles of cash, in which case you can probably have both.

Either way, we have to admire the guy’s cool factor, which is off the charts as he rides around the grounds on his badass freaking tank. It looks like the controls are little more than a couple of levers, which may be how all vintage tanks work. I’ll freely admit I don’t know much at all about tanks, although I am learning more and more. For instance, today I learned it’s not only acceptable to show up on a tank, but is actually amazingly cool. So as soon as I get my hands on one, or at least the bottom half of one, I’m going to try this out myself!

What Happens When You Mix Diesel with Gasoline? 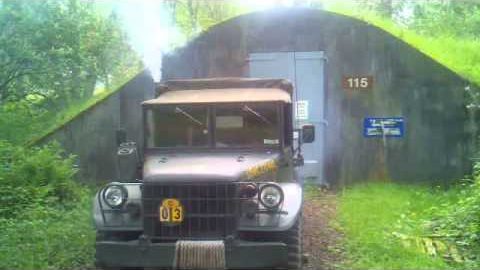