Guy Takes His GF For a Ride… Rolls His RZR 5 Times!

Guy Takes His GF For a Ride… Rolls His RZR 5 Times!

Here’s a quick look at what not to do if you want to impress a girl in a RZR!

While I knew what was coming based on the video’s title, I wasn’t really sure how things would unfold and how I would feel about watching two kids tumbling in a side by side, especially considering one of them has absolutely no control over the outcome, as she’s just along for the ride, literally.

I’ll be honest, I tend to make pretty quick decisions about whether or not I like people based on things like their attitude and even their facial expressions. Watching this, it took mere seconds to decided the kid driving the RZR was not going to be on my Christmas card list. Maybe it’s just me, but the smug arrogance and smirk just rubbed me the wrong way. That made the outcome of this video more enjoyable for me, and I know that says a lot about me as a person too and I accept that.

The young lady in the passenger seat, I feel bad for. She seems to just be enjoying her ride with the cocky driver and appears to be happy and cheerful. I would send her a Christmas card, as long as she promised not to show it to the kid behind the wheel.

Moving on to what we all came to see, the driver seems to be doing a good enough job driving this RZR, which is of the 900cc variety, good for 75 horsepower or so and plenty of fun on the trails and in the fields. He sprints up to speed, then slows for some tight turns, keeping an eye on the other SxS that comes into view now and then. However, when they decide to open up the throttle and hit some pretty high speeds, our young driver loses control and the ride goes tumbling, barrel rolling 5 times before finally coming to rest.

As you can see, the riders seem to be a big dazed but otherwise okay, a testament to the beefy roll cages and racecar-style belts that do a great job of keeping the occupants safe throughout the tumble. Perhaps this incident will teach the driver a little humility, bringing him down a notch and earning him that coveted spot on my address list come Christmas time! 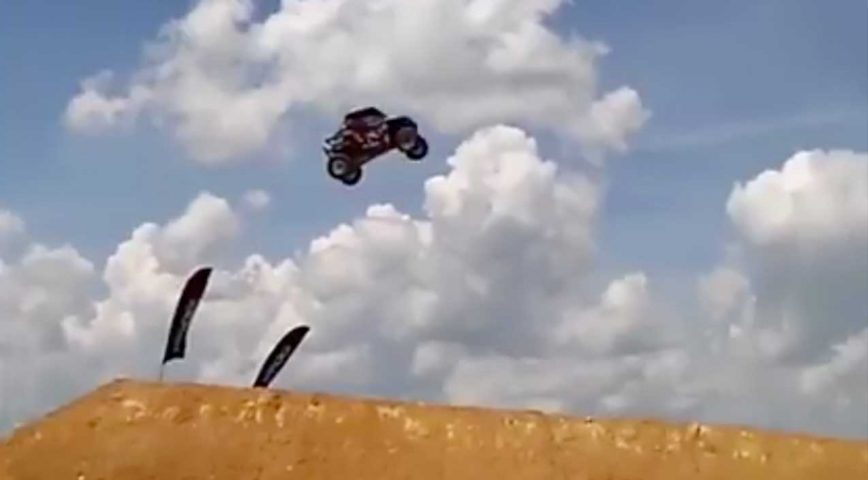