Handing Over The Keys to Our Giveaway C8, The Winner Was Speechless! 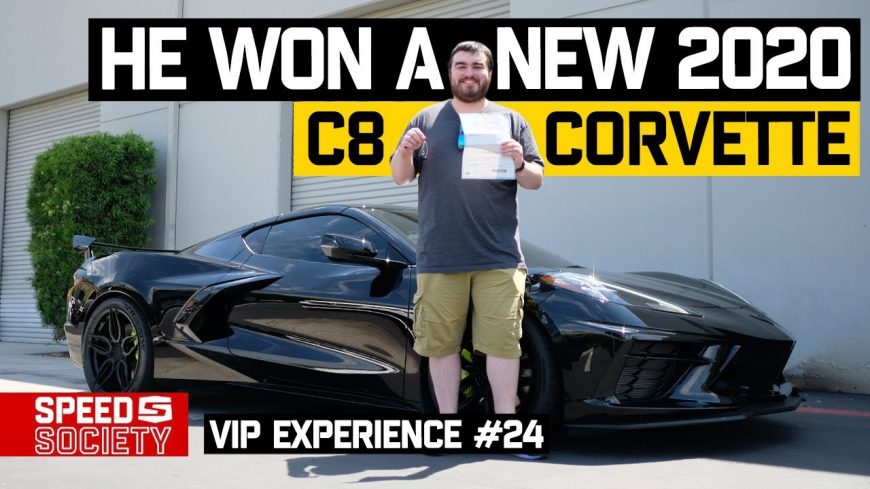 Over the past couple of months, Speed Society fans have been treated to a one-of-a-kind experience. When the C8 Corvette came out, we immediately knew that we had to give one away. As those familiar with our sweepstakes will tell you, though, it couldn’t just be any old C8. Instead, we would be among the first to modify one… but there was another twist.

As this was a special experience, we really wanted the fans to get in on it. Therefore, voting would allow fans to choose different components of the car from the color to the wheels and even the spoiler. When all was said and done, we would say that you guys did a spectacular job. As if the C8 wasn’t stunning enough in stock form, the mod list on this one really makes the results speak for themselves.

As much as we have really fallen in love with this thing, it was time for the next chapter. In the final chapter of Speed Society’s relationship with this particular C8, we would drop the keys in the hands of the car’s new owner. Blake Schutte flew in from Indiana with his father and his life would be changed forever!

To make things even more interesting, we headed to the airport in our next giveaway car, an 1100hp Dodge Challenger Hellcat Redeye to pick him up. As usual, there were smiles all the way around from the moment that we pulled up to greet Blake at the airport.

From there, it was time to head back to Speed Society HQ so that he could lay eyes on his new car in person for the first time. We could tell that he couldn’t wait to get behind the wheel so after getting acquainted with his new C8, it was time to show Blake some of the best driving roads around San Diego.

This is something that’s better seen than talked about so watch and listen to the video below to absorb all of the glory that is the C8 Corvette.

Be sure to click here to see how you could have a shot at being the winner Forza Tuned 1100 hp Redeye HELLCAT!!

« V8 Jeep Wrangler Could Soon Hit Dealers Near You