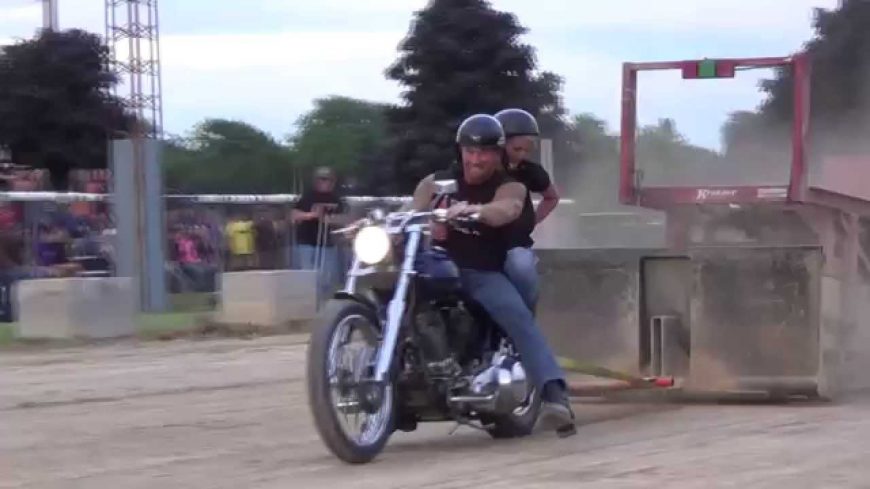 Even as one of the leading authorities in all of motorsports media, we have to admit that every once in a while, something comes along and really takes us off guard. Sure, we’re incredibly familiar with the concept of the tractor pull. However, we are also used to seeing big heavily modified trucks or massive purpose-built tractors that are designed to take on the task of pulling the heavy load through the dirt. In this one, though, the situation is switched up quite a bit and that’s putting it quite lightly. This one goes quite far off of the beaten path to put on a show.

In this crazy display that’s a little bit more redneck than they’d probably like to admit, the scene is set as it looks exactly like a traditional tractor pull. However, instead of big trucks or tractors spewing smoke into the sky and showing off how much torque they’re equipped with, this one features none other than a couple of motorcycles doing the pulling. If it sounds like something that might get a little bit sketchy from time to time, that’s certainly because it is. Pulling the load while trying to maintain balance certainly gives these competitors a little bit of a handful but we have to admit that it’s also a ton of fun to watch in motion.

By following along down in the video below, viewers will be able to witness this one for themselves and soak in the absurdity that we think they’re going to love.  Just when you thought that the art of the tractor pull couldn’t get much crazier, somebody with a little bit of a creative mind comes along and gives us something to really sink our teeth into even deeper. After watching something like this, there’s absolutely no telling what is coming next.

« The World’s Largest Sailing Yacht, The “Black Pearl”. If Jack Sparrow Were A Modern Day Billionaire.