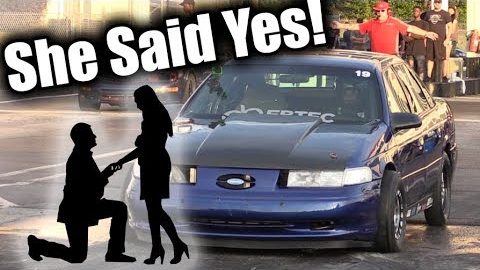 One of the privileges that we, as car enthusiasts, have that not a whole lot of other people get to have is the fact that being a gearhead is one thread that is woven throughout our entire lives sometimes. Whether it be your work, what you doing with your vacation time, or maybe even something that is incorporated into your family, a lot of the time, you’ll see that car guys and ladies simply can never put the passion down. That might also even be true when it comes time for a marriage proposal like the one that we see here.

In this one, we head to the starting line at Street Car Takeover in Atlanta as Zack Wright heads out in his Ford Taurus, an unlikely powerhouse, to make a couple of passes. We will get to that part in just a second. The day didn’t seem too much unlike any other day that you would catch out at Atlanta Dragway. However, when Zach pulled up to the line here, the slight twist is that after his burnout, he would be planning one of life’s biggest moments as he began to propose to his girlfriend and now fiancé in front of everybody. The grand gesture is one that had to be quite nerve-racking but ended with great success when it was all said and done.

After the proposal was a big success, it was still time to race as Zach would take his Taurus down the track, the same car that he’s had since high school but has definitely undergone some serious modifications. When all is said and done, the Taurus ended up almost blasting its way into the single digit range in a quarter mile. We think that’s quite impressive as you’re not going to see that kind of performance from too many other examples of the Taurus that are working like that out there!

« He Taught His Kid Sister How To Drive Manual Transmission In His Drift Car!