He Put a Cummins DUALLY on a Full SLICK and Sent it! 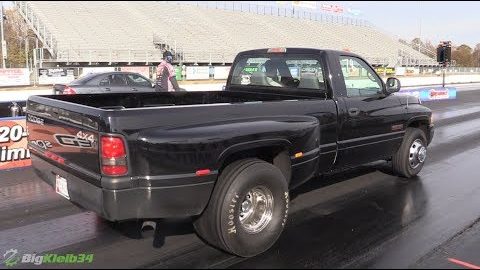 If you head out to the drag strip, you’re bound to see all sorts of different creations making their way down the track. There’s always a different twist with each time you head out and we definitely mean that because pretty much everybody brings everything down to the quarter-mile to see how it will do, whether it’s built for the racing surface or not. With that in mind, it’s not too common that you’ll see a dually make its way down the track and certainly not one like this. Generally, if that happens, it’s just somebody looking to see what their factory powered machine can do but not this time.

This time, we check out a Cummins powered Dodge Ram that is able to really scoot as it gets rid of the pair of tires in the back and uses the wide stance to the fullest extent, stuffing a big, fat slick under the rear end. This certainly isn’t like anything that we’ve ever seen before and we were kind of shocked to see it making its way up to the starting line at Maryland International Raceway, smoking the tires and getting ready to race. Honestly, we really weren’t quite sure what to expect here and the results are really enough to make you think twice about racing one of these things if it pulls up next to you at the light.

Follow along in the video below as this thing is able to smash its way into the 12-second range with ease. In the grand scheme of things, 12s might not be the fastest that you’ve ever seen hit the strip but when you consider all other factors, that’s not too bad for a truck that has to weigh a ton. After you see this thing roll down the strip for yourself, be sure to tell us what you think of the heavyweight as it manages to pack a punch in a straight line. It’s not too often that you see something like this so be sure to keep your eyes peeled because it all happens mighty quickly!

« Trying to Get YouTube Views Gone too Far, Crossing the Line to Get Revenge on Bad Parking