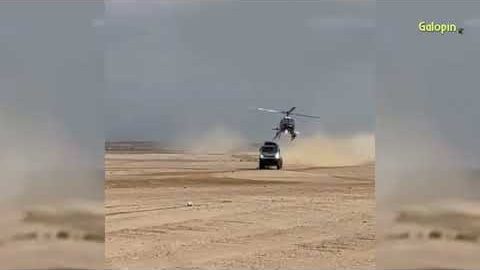 For the vast majority of motorsports media people, they know what it means to get that perfect shot. Sometimes, it might mean doing things like putting yourself in a little bit of a precarious position in order to make sure you get the perfect image. It might not be the smartest thing in the world but hey, a well-executed shot is definitely one that can be appreciated.

However, on the same token, there is definitely a bold line between getting the shot and being unaware or making bad decisions. In drag racing, for example, any sort of photographer or video person on the starting line wants to make sure that they have their head on a swivel. At the end of the day, in any form of motorsport, we never really know what’s going to happen. Being aware and never pushing the limits too far is going to go along way toward keeping your health intact.

This time, we check in with a situation where things simply went a little bit too far. From what we gathered, the video below follows an event that took place during the Dakar rally. During such a rally, one class that is a fan favorite features Kamaz trucks which are rather large and modified to compete in the desert. It’s truly a sight to see.

During the last stage of the event, though, apparently, an aircraft was being used to film and flew pretty low. It went so low that one of the trucks competing hit a bit of a jump and ended up clipping the helicopter in question.

I don’t think that it necessarily takes an engineer to figure out this could’ve very well been incredibly disastrous and probably had quite a good likelihood of being fatal. Luckily, though, the incident only caused some damage to the top of the truck which we can see toward the end of the video. While there were some brutal consequences insight, the extent of the damage was nothing more than a banged-up air intake.

The KAMAZ Master Truck Drives Through Anything | Best of POV .