Hellcat Charger Waiting For Auction Was Apparently Destroyed Before Repo

Hellcat Charger Waiting For Auction Was Apparently Destroyed Before Repo

Nobody likes a sore loser.

The full disclaimer here is that we don’t have the back story to this Dodge Charger Hellcat. However, we can make a pretty good guess as to how the car ended up in shambles. The short story is that it would appear as if maybe the person who previously owned it was a sore loser when they lost the payment game with the bank.

The car in question is none other than a 2017 Charger Hellcat. It’s definitely a car that is admired by many. However, if we were to write the backstory here, we would probably guess that the owner of the car threw a little bit of a temper tantrum when the bank called to say that they wanted it back. We don’t have any evidence to substantiate that but one look at the car leads us to believe that this is the case.

The person behind the camera here appears to be at some sort of auction. The bright red Hellcat looks a little bit out of place in the setting full of pretty normal cars. However, when we find the inside that has a destroyed interior, complete with panels ripped out and seats torn to shreds, we’re kind of able to deduce how it ended up there. The narrator even notes that he would call the car “Freddy Kreuger” if he were to buy it, joking about how torn up the seats were.

By following along with the video below, we get to see the sad, sad scene that has taken a once-great car and reduced it to something like this. Hopefully, the machine ended up in the hands of somebody who could take care of it and would eventually go on to repair all of the components that have been destroyed. From what we see, it definitely looks like a ride that could very easily be brought back to its former glory with somebody who’s willing to spend just a little bit of money. 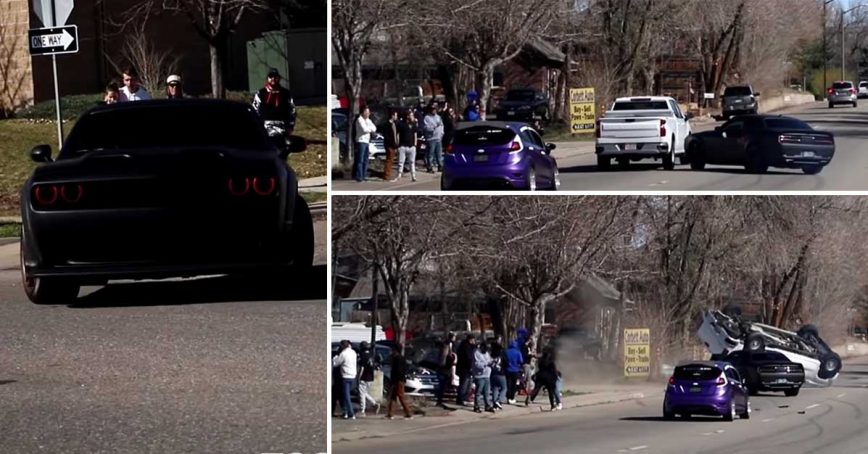