Hellcat Redeye Makes Epic Save but We’re Not Sure How!

Hellcat Redeye Makes Epic Save but We’re Not Sure How!

There’s nothing like a close call to really wake you up in the morning. During ...

There’s nothing like a close call to really wake you up in the morning. During the course of a drag race, there is a lot to focus on. Drivers will be really dialed in, trying to get the car out of the hole and follow through on the big end. All this has to be done while making sure that nothing mechanical is going awry and also making sure to keep it out of the wall.

For a machine like the Dodge Challenger Hellcat Redeye, keeping it in a straight line could prove to be a real challenge for somebody without a good bit of experience. This time, we tune in with the machine that makes almost 800 hp out of the box. That’s a lot of power for a modified vehicle let alone a stock one.

One of the things that might make a machine like this challenging to drive on the strip is that it comes with a nice big set of wheels from the factory. For looks, they certainly pass the eye test. However, when it comes to be efficient in drag racing, they might not exactly be the best. The most experienced drivers would probably tell you that when the tires break traction, it would probably be best to let out. After all, nobody’s going to make their best pass while doing a burnout halfway down the track.

This driver seemed to want to power through the tire spin, though. Instead of letting out of the throttle, he stayed in it! Eventually, that would chuck the Mopar sideways. This actually ended up being rather dramatic for a low-speed incident as the car would swerve back and forth, nearly plowing straight into the wall. Luckily, though, the ride would be able to escape by a narrow margin. Spending money repairing a $70,000 car that went down like this isn’t how we would choose to dedicate our free time. This driver is incredibly fortunate to see his Challenger live through another race unscathed. 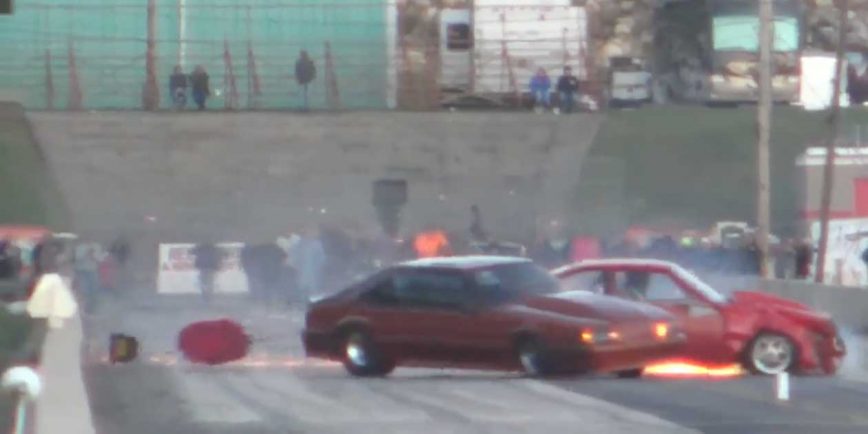