The Jeep Gladiator has been one of the more exciting things to come from the company ...

The Jeep Gladiator has been one of the more exciting things to come from the company as of late. People have been begging for a Jeep pickup truck for a while now. In fact, the grumblings started almost as soon as we saw the departure of the Jeep Comanche. The brand has finally obliged. Now that the Gladiator is finally rolling through the streets, reviewers have been able to get their hands on it and give us their opinions. However, without even the chance for those tires to get nice and broken in, it seems like some folks have modified these beasts. Imagine that! We aren’t talking about basic modifications like lift kits and bigger tires, either.

When we Look toward this creation from America’s Most Wanted 4×4 shop, we see something a little bit more extreme. It seems like the Hellcat power plant is making its way into more and more platforms. It just so happens that the brand-new Gladiator is one of those platforms. We have seen a Hellcat-powered Jeep Wrangler, so the gladiator is probably a similar swap process. It only made sense that this would happen eventually. However, we’re a little bit shocked that it’s taken on such a complete form so soon. It seems almost like this Gladiator was purchased, rolled off of the assembly line, and went straight into the shop to be modified.

By following along with the clip below, we get to check out this awesome swap that has already been paying dividends. Instead of just a little walk around, this video is all about action! That’s right. The shop is going the extra mile to give viewers exactly what we want. Be sure to tune in with the video below to catch quite the display for the ears and eyes. We would argue that this swap is certainly a nice little upgrade for the up and coming Jeep pickup.

The 2020 Jeep Gladiator Takes on Tacoma, Ranger, & Colorado in This Epic First-Ever Truck Shoot Out! 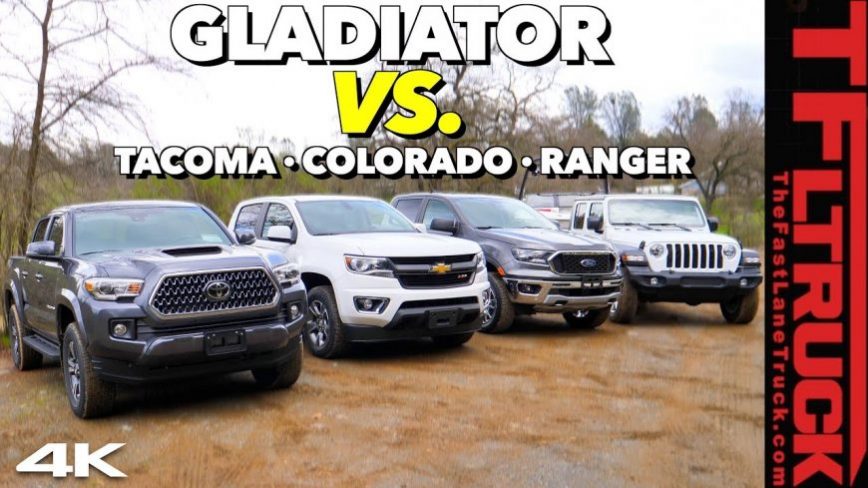