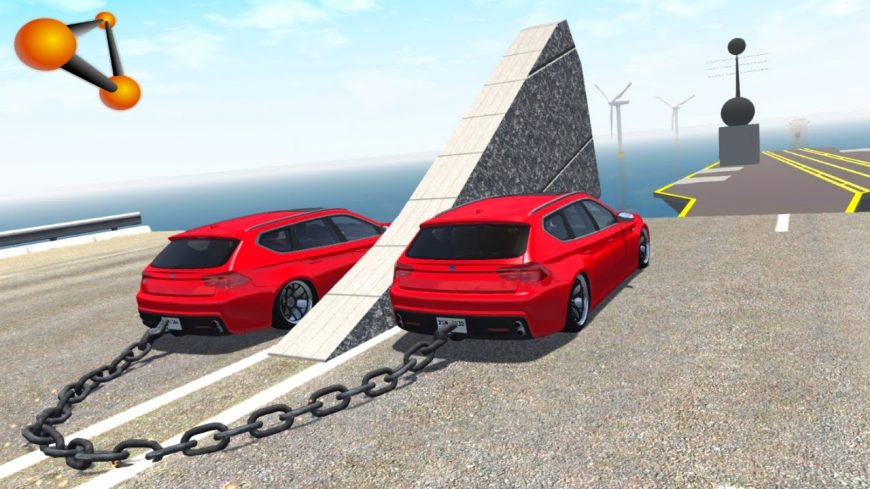 Sometimes it really is the simple things that bring us the most joy. BeamNG is basically a video game, only one that offers incredibly realistic crash simulations and allows you to customize the settings to create countless different scenarios in which you crash cars to see how they react to the conditions and handle the abuse.

This scenario is one we haven’t seen before, but in no less entertaining for sure. The premise is two cars are chained together with a chain that looks like it would weigh – literally – a ton. They’re driven at speed toward a tall, skinny ramp in the middle of the road that will catch the chain and lift the rear of the cars up as they pass, basically flinging them off the end of the ramp toward a waiting aircraft carrier. Completely absurd and so much fun!

I think I’m going to have to download this game and have some fun with it myself. I’ve seen too many videos that jus took like they would be so much fun to recreate, plus they’ve planted the seeds for other ideas too for some original content as well. In fact, I’m thinking we need to get some of you guys on board as well and see what we can come up with if we collaborate on some ideas and see what kind of shenanigans we can come up with.

If you think about it, this is basically a perfect way to test out some over the top stunts without having to worry about somebody getting hurt if things go wrong. In fact, things going wrong seems like the best possible outcome, because what’s more fun than trying to wreck a car one way, only to have it get demolished in a completely unexpected way.

What do you think, Speed Society Nation? Should we get our own copy of BeamNG and build some crazy, over-the-top crash courses? If we do, how many of you out there would be willing to jump online and crash with us? This could be the beginning of a good thing!