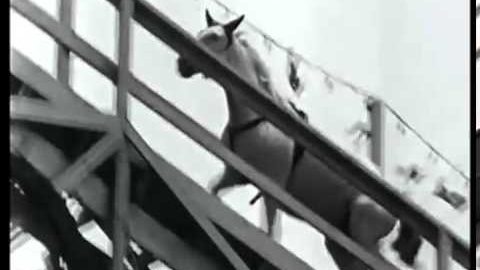 It’s rumored that, a horseback rider by the name of “William “Doc” Carver” was out and about when he got wrapped up in a situation where his horse would try to cross a  bridge that would then break underneath them. The horse would fall and dive off of the bridge into the water below and, after seeing this, it would lead him to make the decision to try and make it into a competition, forcing horses to dive off of a high ledge in a sort of diving competition much like you would see humans doing today.The result looks pretty inhumane so we’re definitely glad that this extreme exhibiton isn’t a thing anymore. With one glance at this competition, both your everyday person and animal rights activists alike would be freaking out, rightfully so! This just doesn’t look natural in any way, shape, or form.

Follow along with the video down below that takes you on the scene of something that might have been viewed as normal years ago but has been worked out of culture ever since. After watching this obscure display, be sure to tell us what you think of the incredibly odd sport that was discovered on accident and now has its very own place in history.