What Happens When A Hot Rod Takes On A Monster Truck In A Drag Race? 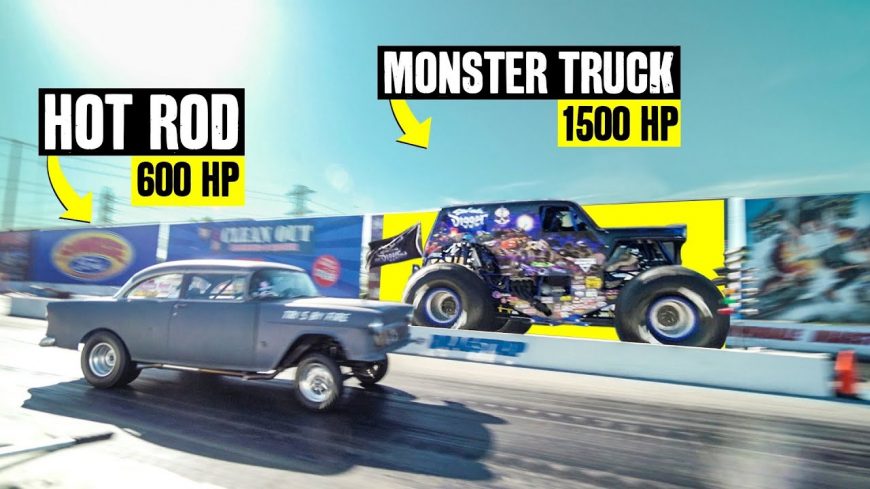 Monster trucks, naturally, don’t seem like something that would ever be competitive on a drag strip. There’s nothing inherently wrong with monster trucks. In fact, most of the time, they’re an absolute blast. However, taking them out of context like this doesn’t seem like it’ll end well. There’s something about heavyweights with big off-road tires that just doesn’t scream “efficiency” on the drag strip.

On the other hand, when it comes to a machine that is built for drag racing, it’s obviously going to have an advantage. With a lighter weight combination and attention to different aspects that matter in drag racing like traction, an efficient set up will beat a powerful set up all day long. That’s especially true when the powerful set up just so happens to be designed to tear through the dirt.

This time, the guys over at Hoonigan dive into just that concept. In one corner, we find Jon Chase and the ’55 “Tri-Five by Fire” hot rod. In the other, we have a familiar face in Ryan Anderson. One of the most accomplished monster truck drivers of all time is going to be behind the wheel of Son-uva Digger. The monster truck has more than double the horsepower of the Tri-Five. However, it’s really an apples to oranges comparison when it comes to drag racing. I guess that the only way to find out which will reign supreme is to get down to business and make the race happen.

When things actually did unfold in between those concrete walls, we ended up being quite surprised. We would’ve been inclined to think that the monster truck had absolutely no business being on a drag strip. It ends up being a little bit more competitive than we had imagined, though. Will the truck deliver enough to compete with a machine that’s slightly more purpose-built for the task at hand? Find out below!