How Many Trucks Will it Take to Beat a Duramax Powered Monster Truck in Tug-of-War? 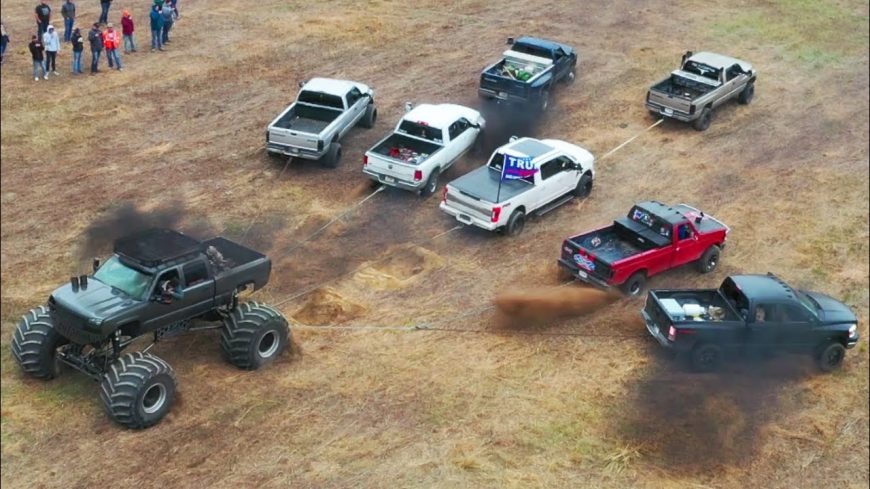 Over on the WhistlinDiesel YouTube channel, the idea is to go big or go home. We have seen all sorts of crazy ideas come to life on the back of pure mayhem on the channel. These concepts range from pure destruction to creative ideas that have our host tinkering with some of the biggest and strongest machines that one could possibly fathom. This time, we check out a video that falls into the latter as a machine known as the “Monstermax” really pushes itself to the limit here.

As the name infers, this monster truck has been built with all of the strongest components including a Duramax diesel engine under the hood. Not only is this thing capable of some massive power and torque, it is also going to weigh quite a bit. It doesn’t take an engineer to figure that one out. However, what it might take an engineer to figure out, though, it’s just how many regular trucks it would take to be able to pull the monster max.

This time, we tune with a good old fashion tug-of-war. There’s nothing all that complex about the idea. However, a wrench is thrown in the gears when we find out about a little bit of a plot twist that makes this tug-of-war different than the rest. Instead of a simple one-on-one, trucks keep getting added to one side of the equation to see just how many it would take to pull the Monstermax.

Eventually, the count tallies up to seven!

At the end of the day, the Monstermax is massive but is there any way that it could possibly compare to pulling seven full-size trucks along? By following along with the video below, we get to find out just that! When it comes to extreme engineering, this one has that concept written all over it.