How Much Faster is a Koenigsegg Agera R Than a Ferrari 458? 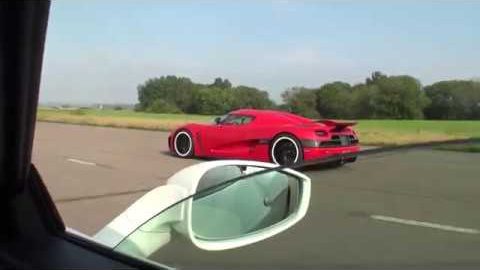 With a car like the Ferrari 458 Italia, you really can’t go wrong. It’s definitely a supercar with looks and performance that will really make you stand out from the pack. However, this video just goes to show you that there is ALWAYS somebody faster out there. If you’re racing something like the Koenigsegg Agera R, a hypercar that makes gobs of power, you might just reconsider your place in the pecking order.

In this one, we get to see exactly what it’s like when the Agera R and 458 Italia square off and I think this might just make you reconsider what production cars are really “fast.” This display really puts things into perspective on the grand scale.

Now, the Koenigsegg offers up a 5.0 Liter twin turbo V8 that’s able to create 1,016 horsepower while the Ferrari features a 4.5L V8 making about half of that at 562 HP, so you have to keep that idea in the back of your mind. This really doesn’t take anything away from the Ferrari at all, but rather shows you how impressive the likes of the Koenigsegg really is!

Check out the video below that shows the Koenigsegg rocketing away from the Ferrari like it’s nothing. In a dog eat dog world, it looks like, at least in this race, the Agera R is the biggest dog. In this world, it’s hard to hold the pedestal for long so it’ll be interesting to see what comes along to try and knock this incredible machine off of it’s temporary perch!