How Ford Owners Ghost Ride The Whip at 50MPH 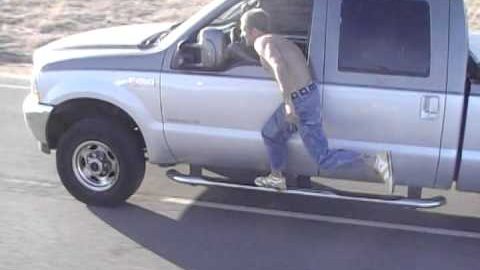 We watch in as this guy is rolling at about 50 mph, when all of a sudden, he decides to hop out of his truck and take a ride on the wild side, hanging on to the steering wheel and nothing else as the truck barrels down the highway with no occupants inside!

If I were you, I wouldn’t want to try this one at home. This guy is one slip away from a pretty ugly fate but to some people, the adrenaline rush is more than worth the risk. Personally, I would rather sit on this side of the screen and watch someone else pulling off this insanity.