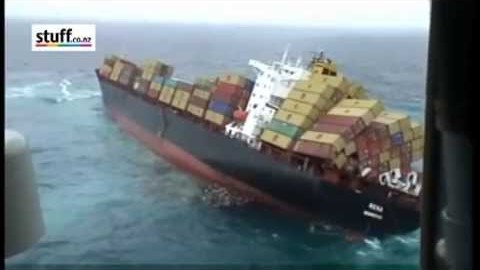 As it turns out, when you are at sea piloting a container ship, there is a lot more to it than just putting the throttle down and going in a straight line.

As the crew aboard the container ship, “Rena” would learn, many obstacles await that are ready to take the ship down, including a mine field of underwater reefs.

This time, we see some of the adverse effects that happen when running into a reef that you never saw coming. This catastrophe happened about 12 nautical miles outside of Tauranga, New Zeland.

After running into Astrolabe Reef, the ship would go onto dump hazardous materials and fuel into the water, creating what was dubbed New Zealand’s biggest spill ever and here we were concerned that there were exotic cars in those containers.

Check out the video below that shows just some of the wreckage. The ship would remain there, stuck on the reef for several days before eventually breaking in half due to an increased hull pressure and loss of structural rigidity from the hit. Luckily, the crew was evacuated, but this is still one monumental accident.