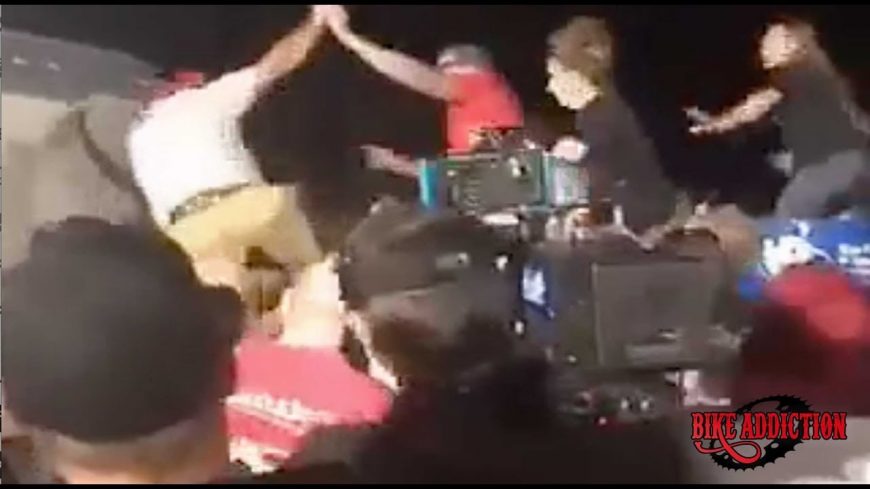 We had a fan send in this video from Las Vegas last night, apparently, a disagreement turned to a heated argument which devolved into a massive brawl with punches, kicks and insults flying in all directions. The situation, looking very much like a mosh pit at a rock show, erupted at one of Sin City’s well-known street racing locations while filming was taking place. In racing, especially street racing, things can get heated when money and egos are involved. Some people think street racing is all fun and games but never see things like this happen. We are not sure why the fight broke but we are sure that it had something to do with a wager and a heaping helping of pride.

Here is an image of the famous Las Vegas street racing spot from another day.

You can witness multiple people throwing punches and a lot of pushing and shoving amongst the heated fray. At one point, we even see a guy leap into the middle of the brawl from the back of the truck. You can also see the camera crew right in the mix getting everything on video so we will be able to see the full version in a few months on TV. The production crew can be heard at the end of the clip trying to get back their microphones from some of the individuals involved in the scuffle. As of now, there have been no reports of injuries, nor has there been mention of police involvement, so hopefully the situation won’t evolve into a legal matter. We can’t say which Street Outlaws crew was out there because none of that was mentioned but will update you guys as soon as we find out.

Check out the video below to see the most heated moment of the night.

« This Genius Backpack Turns Into An Electric Skateboard