Huge Tire Fire in Texas… The EPA Has Been Called in For Assistance! 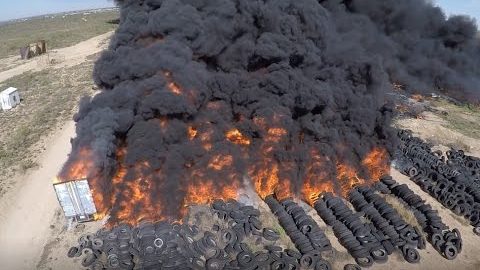 While there are many of us who might enjoy a little bit of a tire fire in a burnout here and there, that’s quite a different situation from having a whole storage facility worth of tires go up in flames. What makes the situation even worse is the fact that all of these tires are out in the middle of nowhere which makes extinguishing the blaze almost impossible.

Now, you might be asking yourself, if there’s a massive fire in the middle of nowhere what would be the incentives to put it out? I could see if someone’s property were at risk, it’d be a worthy cause, but it does appear as if that isn’t the case and as if most of the tires and are a lost cause at this point anyways, so why would anybody necessarily care that the fire trucks that came to the scene couldn’t carry enough water to extinguish the blaze? Why not just let it burn out when all of that fuel is gone?

Well, as you might have guessed, letting all that rubber burn endlesslyIs will send hundreds of toxins out into the environment as the black smoke rolls off of the ground and into the sky. If the tires were to continue burning, they could put any people within miles at risk of consuming all of the harmful airborne chemicals. So, if the local fire departments don’t have enough power to extinguish the blaze with no fire hydrants nearby and it needs to be done, what can you do?

Latest latest updates tell us that The Environmental Protection Agency has been reached out to with the attempt of seeing if they have any available resources to dispatch to this massive fire that could potentially help save the well-being of the environment around it. For now, all that we have is the video below that shows the incredibly sized fire omitting a rather sizable cloud of black smoke that billows away.

« Watch How To “Make” Liquid Propane