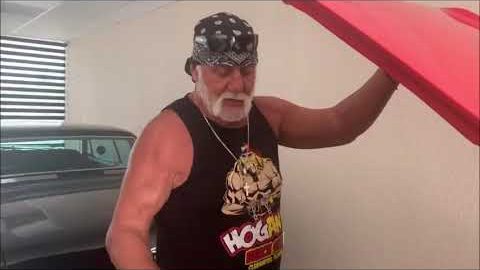 While many wrestlers do have a lot of input into their character on television, the people behind the character might not exactly share all personality traits with said character. For example, if you expect Dwayne Johnson to act like “The Rock” at home, you may be sorely mistaken. Sure, Johnson probably borrows some of the confidence from his character. However, with how cocky The Rock used to be on television, it’s hard to imagine somebody acting like that in real life.

Another character that we would see maybe borrowing a couple of personality traits from his character is  Terry Bollea aka Hulk Hogan. As it turns out, Bollea has quite a taste for cars. Now, if we were to guess what kind of cars Hulk Hogan would like to drive, we would probably venture to think that he’d have a garage full of American muscle. As it turns out, the Hulkster actually does have several American classics in his own personal garage.

As one of wrestling’s biggest stars in history, he is worth an estimated $25 million, according to several sources. With that, we might guess that there are a couple of other cars hiding out elsewhere. After all, there have been a couple of cars famously linked to him including a red and yellow Dodge Viper and more recently a Dodge Demon.

Below, we get the opportunity to take a look inside of the Hulkster’s own personal garage. As a kid who loved wrestling, this is almost a childhood dream come true to be able to look behind the scenes with one of the legends of the sport. Inside, a part of wrestling fans has to be kind of happy to see that some of that on-screen Americana remains behind the scenes with this icon. As far as wrestling goes, they simply don’t get much bigger.

« The Fastest Complete Brake Change Ever Goes Down in Just Over a Minute!