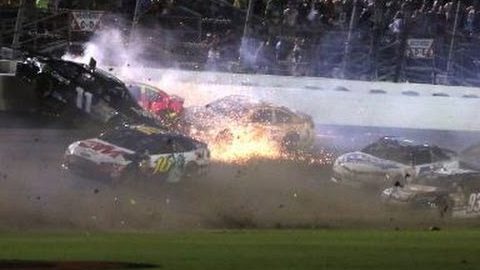 When it comes to the internet there is tons of information that is being passed off as fact on a regular basis and being thrown around over and over again as that “share” button is pounded on countless times.

With Hurricane Matthew hitting the southeast corner of our country and racking up over $5 billion in damage, it’s only natural that the storm became a trending topic on social media this past weekend.

While the country looked on, hoping that everything would work out for the best down in the southeastern states, some took the opportunity to push a story about Daytona International Speedway, posting a picture again and again that the venue had been substantially flooded in the wake of this horrific storm

While it was an alarming picture that had been shared over and over again, it turned out that the image just wasn’t true to real life, well, at least not in terms of what was happening thanks to Hurrican Matthew. Daytona Speedway released a statement on the matter.

It would later be continued that “Pictures of a past weather event at Daytona International Speedway have been circulating on social media during the storm. Those pictures are from a weather event in 2009. There was no flood damage to the facility from Hurricane Matthew. We are working with local, regional and state officials on recovery efforts following Hurricane Matthew. Daytona International Speedway is once again serving as a staging site for Florida Power & Light crews. Our thoughts and prayers are with everyone who has been impacted by this weather system.

This just goes to show you how easily a false story can spread and words alongside images can be mangled and twisted to tell whatever story happens to be the most profitable or viral at the time. While this might seem like a trivial post, you can see how stories like this could possibly translate to others that make a difference. *AHEM, Election 2016*

Be on high alert, folks, and know that whoever is pulling the strings on the media that you’re consuming can twist the facts to support whatever goal it is that they have in mind, whether it be to deliver you objective media or not.

« How to Install a “push to start” button in any car