One of those things that plague just about everybody in some capacity is rust. While ...

One of those things that plague just about everybody in some capacity is rust. While it’s so common in just about every single facet of anything that’s exposed to the outdoors, it seems like something that nobody really wants to deal with or knows how to. As mother nature eats away at your metal objects, she takes away years of their lifespan and that shiny finish that they once had but with the right tools, you can fight back! Sometimes, with a light enough layer of rust, there are tools that might be able to get your clean finish back and it might be a lot easier than you had originally thought. This time, the method of rust removal is about as simple as it gets and this is definitely one trick that you’re going to want to add to your arsenal.

Using nothing more than a touch of vinegar, this DIY genius takes us on a ride as he cleans up a little bit of unsightly surface rust on a set of tools. At just two dollars, he was able to get some drill bits alongside some other interesting pieces at an auction but they came with a nice layer of crustiness. However, this time, we’re focusing in on the tools as he gets to restoring them with a little dab of magic. Okay, maybe it’s not exactly magic, but we get to see a time lapse of how the properties of vinegar can go head-to-head with a nice little surface rust and come out victorious. It’s kind of incredible how quickly the vinegar can eat away at the unwanted substance.

Head to the clip down below to check out the rust removal first hand as the vinegar digs deep and really cleans up these bits. Sure, if the rust gets really aggressive, perhaps vinegar might not be the best way to go but if surface rust is the terror at hand, perhaps a little spritz here and there could help you to get cleaned up. After all is said and done, coating these bits with a little bit of oil and wiping it off provides a nice and safe protective coat that would protect the surface from rusting up once again. Using this technique I would bet that you could get some pretty good tools for cheap and restore them without spending very much money at all. 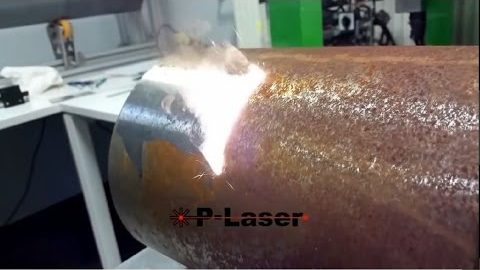