Indoor Scale RC Course That Would Test The Best Of Drivers 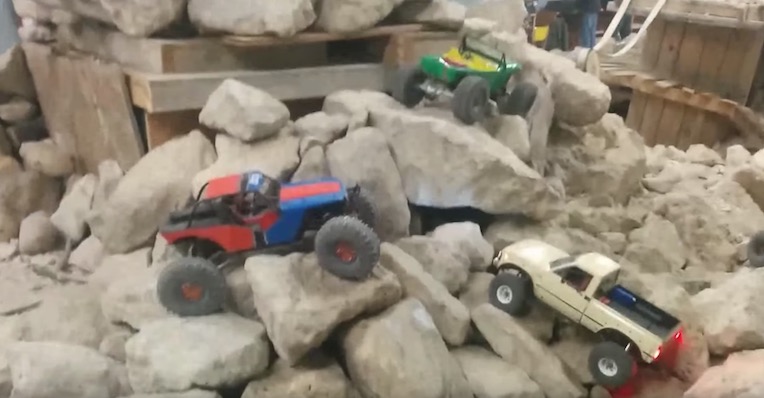 Radio controlled rock crawling followed the actual full-scale rock crawling growth, exploding in popularity over the past decade or so. With amazing advancements in electric motors, lipo batteries, and suspension pieces, these diminutive crawlers have just as much articulation and control as their real life counterparts and they’re ridiculously fun to drive and watch.

In this video, we see a young man wheeling a pickup truck over, around and through some ridiculous obstacles on this amazingly challenging course. We don’t really get too close to the truck itself to check out the detail, but I can tell by watching that it’s an electric build with an insane suspension, because these obstacles are absolutely gnarly and with only a couple of exceptions, young Roger’s ride handles them effortlessly.

Much of that, of course, has to be attributed to Roger himself, who exhibits master-level control over the truck. I’ve never personally driven a crawler, but I know they have a ton of torque on tap and some ultra-precise steering servos that allow the driver the highest level of precision, and Roger uses his intense focus to put the truck exactly where he wants it as he navigates the diverse mix of obstacles on the track.

The track itself is a mix of obstacles that challenge the truck’s suspension, articulation, torque and traction. While some obstacles test just one of those attributes, many of them put 2 or more of those factors to the test, along with the driver’s experience and control. All of this combined create one heck of an intense experience, and our young driver attacks it the focus and skill of a grizzled veteran.

Have any of you guys out there attacked a course like this? Tell us about that experience in the comments on Facebook. We’d love to see more video too.