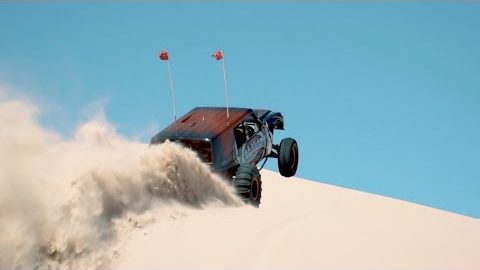 Al-Anabi Racing is known for having some of the most ridiculous rides on the planet, from drag cars to the sand dunes, and this is just another example of one of their rides, taken to the exteme!

Offroad fabricator Joe Fab from Sand Limo took delivery of an actual Nissan Patrol, the ride of choice for those who like to play in the sand overseas, and built a custom mold from the stock Patrol so he could create these custom fiberglass bodies, the first of which you see here. The body was fitted of a custom chassis equipped with many components custom-built just for this rig. One awesome feature is the interior, which has been finished out much like a custom show car with fiberglass covering all of the chassis bars and making the interior feel much more like a real vehicle and not a dune buggy with a body bolted onto it.

The engine, a twin-turbocharged powerplant from CBM cranks out nearly 1,000 horsepower to the tires and is hung way out back over the rear tires, making the Patrol a wheelie machine, which is exactly what the guys over in Qatar want in a ride for the dunes.

As you can see, when legendary offroad driver Blake Wilkey gets behind the wheel, the Patrol is indeed built for wheelies, carrying the front end as far as Blake cares to carry them. It looks like the ride is nicely balanced though, as Blake has no problem keeping the nose in the air with a little throttle modulation as he screams across the sand.

With the build complete and testing done, the Patrol will be headed over to Qatar soon, where its new owner will be eagerly awaiting its arrival so he can take it out with his buddies and hit the sand in what has to be the best looking, most complete sand rig I’ve ever seen.