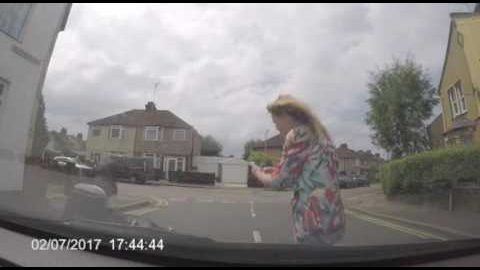 If you plan on navigating the roadways at all, I would venture to think that it’s a good idea for just about everybody who gets behind the wheel of a car or truck to invest in a dash cam of some sort. You really never know what’s going to happen out there when you hit the roads as some people have bad intentions and others just suck at driving. In any scenario, you want to make sure that you’re protected so that the situation doesn’t appear to be your fault when in reality, someone else was up to no good or sleeping behind the wheel. This time, we check out the perfect situation where a dash cam comes in handy, saving a driver from a ton of headache in the long run.

As it turns out, the person wielding the scooter looks like they’re trying to pull off an insurance scam. As this woman navigates her way down the street, the man in question runs out with his moped in hand, backing up into the car and throwing himself on the hood, trying his hardest to imitate an accident scenario. However, it doesn’t appear as if he was aware that the woman had a camera rolling on the dash the entire time, that was until she started yelling about getting it all on camera. She was probably under a lot of distress but, but it would’ve been extra interesting to see what would’ve happened if she didn’t mention the camera one bit and waited for the police to show up.

Check out the video below that shows off the scammers trying to collect a quick buck and getting caught red-handed! For what it’s worth, from reading the comments, apparently, thanks to the license plate on the moped, the people involved were later apprehended by police and faced charges. Hopefully, these guys were punished with a heavy hand so that they would learn their lesson and never try to take someone’s money like this again.