Is the Toyota Hilux as Durable as Top Gear Said it Was? WhistlinDiesel Puts it to the Test With The Diesel Brothers

Is the Toyota Hilux as Durable as Top Gear Said it Was? WhistlinDiesel Puts it to the Test With The Diesel Brothers

The Toyota Hilux is a little bit of an anomaly. We know that Toyota has built a ...

The Toyota Hilux is a little bit of an anomaly. We know that Toyota has built a reputation for putting together reliable vehicles. However, the Hilux really takes that sentiment quite literally. In fact, we might even argue that the model has shown its grit in a variety of different formats that not too many other vehicles would even dare to approach. Some might even go so far as to call it the most durable vehicle to ever exist.

Much of this was due in part to a Top Gear segment that did everything that it could to destroy its version of the model. We aren’t just talking about beating on this truck in a normal fashion, either. Instead, the truck was dropped from thousands of feet above the ground and just kept on going. In the segment, the hosts did everything that they possibly could to try and kill it but it just seemed as if it wasn’t possible.

Fast forward just a little bit and the episode that saw the Hilux being dropped from a crane is turning 18 this year. Since then, a new favorite has emerged as an individual who could finally put an end to one of these things.

Those who have tuned in to the WhistlinDiesel YouTube channel have watched the host destroy just about everything that he can get his hands on. It doesn’t matter if it’s expensive or not, if it’s in his path, there’s a good chance that he’s going to wreak havoc on the machine.

Down in the video below, we check in with the third part of the Hilux durability test as performed by WD. All of these years later, we get another version of the test that has since become an automotive legend. Will the Toyota be able to take such a beating this time around?

WhistlinDiesel is at it Again, This Time With a Twin-Duramax Mega Truck (With Missiles!) 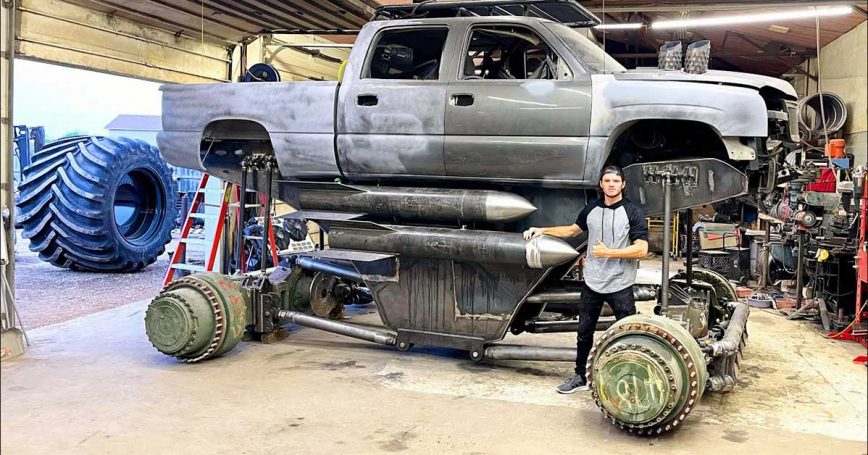