When it comes to the machines that you see launching their way off of sand dunes, you ...

When it comes to the machines that you see launching their way off of sand dunes, you know these things are put to the absolute limit, testing out exactly how far you can push certain components, most notably the suspension, as these machines push their way off of massive inclines and catch some big time hang time, putting themselves in the air and making no bones about the fact that they’re holding nothing back, completely putting themselves at the liberty of gravity as it comes down incredibly hard, making sure that they get their value out of every last component that they invested their hard-earned money into.

This time, we check out what they’re calling the biggest jump in history at the Silver Lake Sand Dunes with what appears to be a purpose-built sand car that goes above and beyond, launching off the dune that probably looks familiar to you if you’ve ever seen this kind of video before. We watch as it is nearly vertical, really putting on a show before coming down hard and completely doing what they would call “yard sale-ing” in this industry, busting parts to pieces and making this guy have to go through the process of picking up the pieces and rebuilding the machine once again.

Follow along in the video below as we are taken along for the ride and put dune side to catch just the right slice of action as this driver really pushes the limits on exactly what his truck is able to accomplish. Even though the truck looks pretty impressive and it’s able to get some pretty awesome air off of this jump, as physics would say, what goes up must come down and gravity really ends up being quite the harsh teacher, quite literally as this truck comes down with a massive thud. See that sight and find out exactly what the driver thought of the whole situation as the footage rolls!

Ride Along With Dan McMillan In His Badass V8 Pre Runner in BAJA! 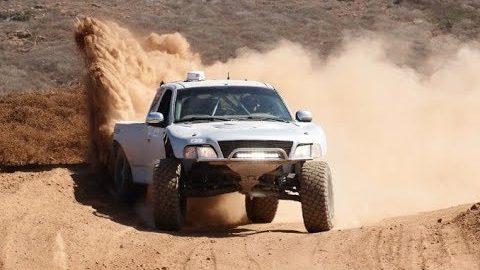