It Took More than 9 Cops to Impound a Single Hotrod 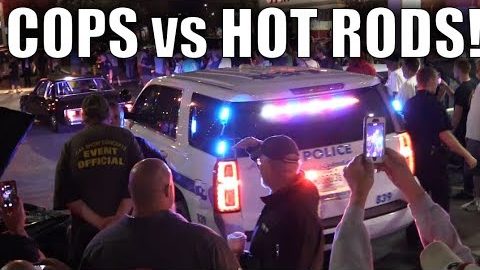 When you’re the proud owner of a hot rod that’s pretty crazily modified, you can’t help but want to show it off. After all, all of that hard work coming together is something to be proud of, something that the car community around you would certainly love to check out and a place like Cruisin Weekend would seem like the venue to do it. However, for Brandon Good, the owner of this Chevrolet Malibu, this passion for his automobile would come crashing down hard at this year’s Cruisin’ Ocean City car show, an event that centers around the city’s convention center but also has enthusiasts spreading out throughout the entire town with countless muscle cars, imports, and just about everything else that would draw the attention of a gear head, for the entire extended weekend.

Most of the time, the major storyline is how strict the police are going to be with enforcing vehicle codes and this time most of the talk around town would be about one black Malibu whose owner would seem to really get the short end of the stick. Most of the time, police officers tend to look the other way at these kinds of infractions as long as the cars are staying within the law and not speeding around town. From my perspective of someone who has frequented the show for years, many times, they will look the other way for this weekend as they understand that the hot rod enthusiasts that come to town really provide a major hike for business. It has even been publicly stated that Wawa, one of the weekend’s hot spot in this major summer vacation destination, has managed to scribble some record weekends in the books thanks to the show and its supporters.

This time, however, the police would come out with a vengeance, apparently, picking this Malibu out of the crowd and chalking up a book of citations before putting it on a tow truck and forcing the owner to go and retrieve it out of impound before stacking it on his trailer and heading home. The owner tells us that he “just got into town about two hours before that and drove across the street to Wawa to get food and hang out.”This is when the video which

This is when the video would start rolling as the car would be surrounded by nine officers that would escort the vehicle around the corner for inspection. When all was said and done, the Brandon tells us that the police told him that the car was “too dangerous to be there and [he] could have an equipment malfunction and run people over.. and it draws too much of a crowd.” This was followed up by being given an inspection which Brandon says isn’t even valid due to classic vehicle laws that makes cars this old exempt from inspection. The officers conducting the investigation would proceed to rip him off a stout nine tickets, anyway, said Good. He was told that if he proceeded to drive it in town again that he would be arrested.

We reached out to the Ocean City Police Department for comment and have yet to hear a response. This is definitely a story that we would love to hear your opinion on.

« Where is Charley Hutton From American Hot Rod now?