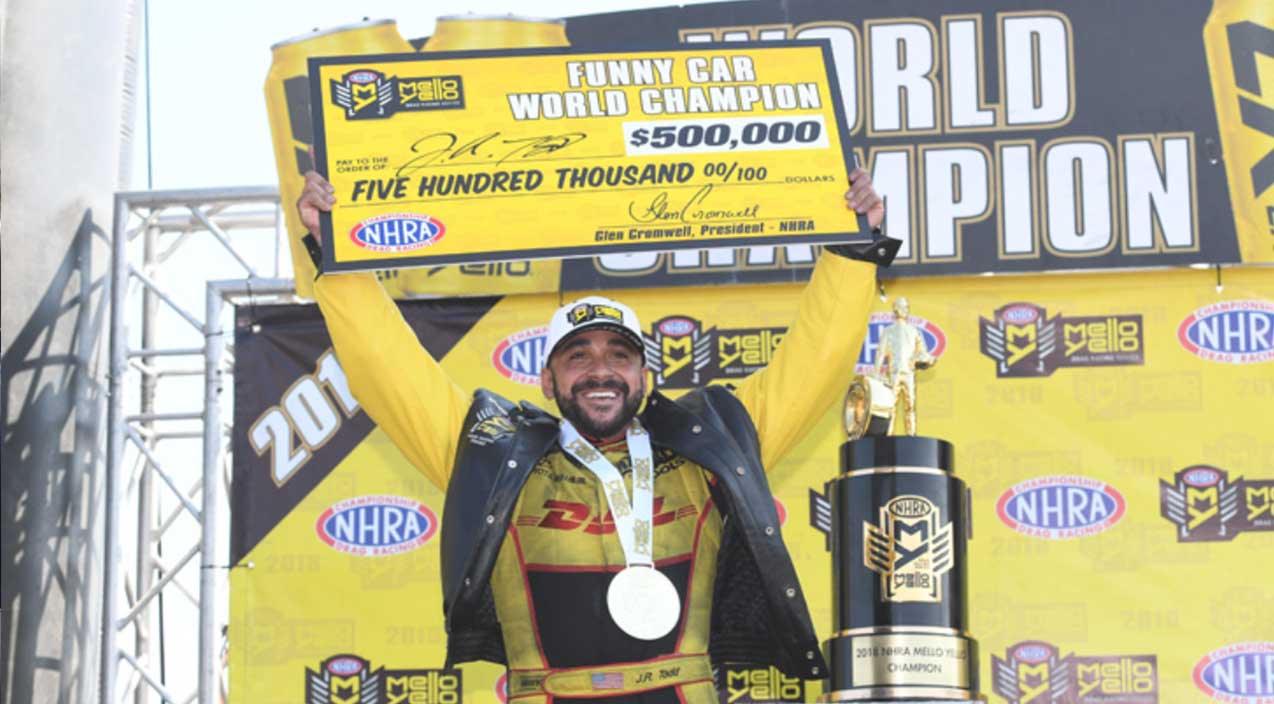 The 2018 Top Fuel world championship was decided a week ago in Vegas when Steve Torrence mathematically eliminated everybody with his fifth straight countdown victory, but the Funny Car and Pro Stock titles remained up for grabs. Although both Kalitta Motorsports driver J.R. Todd and Tanner Gray entered Ponoma with fairly commanding leads, neither of the talented drivers wanted to risk a come-from-behind charge by those behind them in the rankings.

Todd would secure a spot just above his closest competitor, Robert Hight, by qualifying #4, which gave him the best seat in the house to watch Hight’s Camaro go up in smoke in the opening round, handing Todd his first world championship. To put an exclamation point on the title run, J.R. went on to win the race in his DHL Toyota Camry, capping a strong Countdown run that saw him climb from fifth place to first and win by almost 200 points.

In Pro Stock, Jeg Coughlin, Drew Skillman, and Erica Enders, the three drivers with a mathematical shot at catching Gray, all qualified ahead of Tanner, but by qualifying #6, Gray clinched the championship before eliminations even started. At just 19 years old, Gray is the youngest world champion in NHRA history, capping a stellar career that saw him win 13 races in the past 2 seasons. He makes a champion’s exit, as he’s leaving Pro Stock to pursue a career in NASCAR, starting in the Camping World truck series next year.

We send all of these teams our congratulations, as we’ve seen up close and personally the level of the heart, determination, hard work and luck it takes to win a single event, much less a national championship. From the drivers to the tuners and crew chiefs to the crew members to the guys that drive the rigs and the PR crew who keeps the world updated, everybody involved in winning a world championship has certainly worked their butt off to make it happen.

« Sending Off A Racer Who Passed Away With One Last Pass