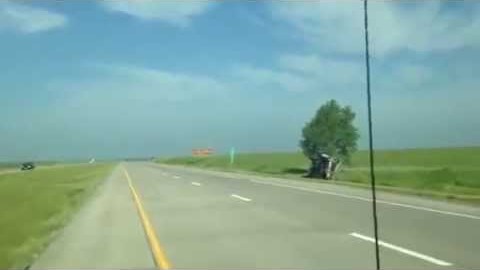 DUKES OF HAZARD JUMP IS REAL AND CAUGHT ON CAMERA!

We’ve all seen car trailers by the side of the road and wondered if we could jump one of them like they do in the movies. One driver in Kansas found out the hard way that you can, but your car will be launched into a sickening crash in the process.

This incident happened on the I70 highway in Kansas, after a Jeep Grand Cherokee driver was seen weaving all over the road. The man holding the camera, Jacob Meyer, claims that he had called police to report the Jeep’s dangerous driving. It appears Meyer could sense something bad was about to happen, and whipped out his phone moments before Greg Harris, the 41-year-old driver of the Grand Cherokee, hit a stationary vehicle’s trailer on the hard shoulder.