When it comes to dialing in a car, there is a lot of work that needs to be done. This ...

When it comes to dialing in a car, there is a lot of work that needs to be done. This is the obvious part. The part that might be a little bit less obvious to the casual drag racing fan is that the surface makes a big difference. We aren’t just talking about if a car is being sent down a typical drag strip or a no prep. Instead, what the actual surface is composed of makes a big difference.

In layman’s terms, concrete is probably about the best racing surface possible. Because it’s more compact, there are more points where the rubber meets the road. Once a little bit of rubber gets laid down on the surface, it can begin to hook pretty well. This means that the surface will be much less porous as the pores are filled with, you guessed it – rubber!

For any person who has raced on the street, they will attest to the fact that asphalt is a lot less forgiving. In fact, it’s probably the most challenging to race on. When combining this with extremely high horsepower racing machines, things get pretty interesting.

This time, we follow along with Farmtruck and AZN as they’re joined by Jeff Lutz and The 57. As it turns out, Lutz has never sent The 57 down an asphalt surface in its life. I guess that there’s a first time for everything, though, and the time is now!

By following along with the video below, we get inside look at a testing session. Some of the most interesting stuff like this goes on behind the scenes and might not necessarily make it to the show. Watching how much time and effort these guys spend to prepare, though, gives us a better appreciation for what’s going on when the racing goes down.- 405 Photo 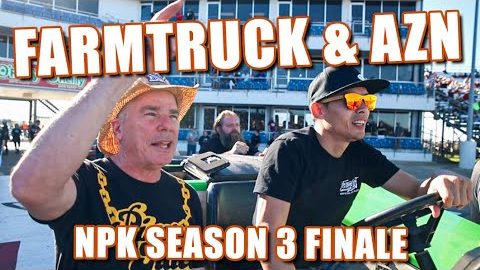