When boredom strikes or we have the need for adrenaline, our minds can tend to come ...

When boredom strikes or we have the need for adrenaline, our minds can tend to come up with some pretty crazy things. Usually, if these things were on television, some of them might just be accompanied by a warning telling you that you shouldn’t try them at home. However, it does look like the people involved here having an absolute blast in their crazy antics. I guess that if they want to try something out like this and risk their own bodies, they’ll just have to also hold themselves accountable for the result that comes on the other side.

Normally, if you have a tube that’s designed to be pulled behind a jet ski or some sort of boat, you’d be starting out in the water, whipping yourself around in the lake and having a great time. However, it appears as if these adrenaline junkies didn’t want to start in the water but instead built themselves a ramp that would launch them into the air after being led up to said ramp by quite a stretch of tarp that could get the tube up to speed and eventually shoot the occupant into the air over the lake, only to come down after catching such a thrill.

If you follow along down in the video below, you’ll be able to bear witness to the situation that maybe they didn’t expect to go so extreme. As the thrillseeker here approaches the ramp, they put together quite the head of steam which launches this rider incredibly high into the air before slamming down in the water. From this angle, it definitely looks like a stunt that this person is going to feel in the morning! After all, they do say that water can feel like concrete if you fall from a high enough distance and break the surface tension. Hopefully, they didn’t get too banged up and all of the highflying antics were worth the thrill.

If vodka Red Bull was a video (Via @the_jabronies_) 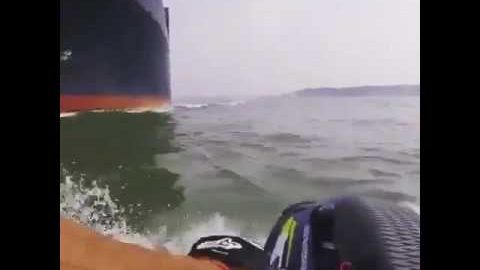